I had the pleasure of attending the press conference last Thursday where Rev. Jesse Jackson, several ministers and several South Suburban mayors announced their intent to hold Governor Pat Quinn to his pre-election promises to move forward on the Abraham Lincoln National Airport. I want to add my voice personally to the chorus calling the Governor to make good on his promise. It’s time for the third airport to fly.

Residents in the South Suburbs have been traveling north for decades for work in Chicago and northwest suburbs. Watching our retail businesses move from Park Forest through the years has been heartbreaking, and we have expended much effort to woo them back. The sad fact is, however, retail businesses today operate by a much differen paradigm than they did when Park Forest’s Centre was a hub of economic activity. Traffic demands are much different for national chains than they were decades ago. Park Forest and surrounding communities need an anchor to drive business south.

The Abraham Lincoln National Airport will do just that.

Before you nod your head and talk about airports that have failed, remember this proposal is unique. A Canadian developer stands ready to dig when the project is approved. As Americans, we justly complain when industry moves from the United States. This project will entail foreign money being spent in the United States.

I was quite disappointed to discover an op-ed piece in the Southtown Star today from columnist Kristen McQueary. Ms. McQueary took the opportunity to bash Rev. Jesse Jackson getting involved in the project, working hard to poison the Jackson well, throwing ad hominem after ad hominem at Jesse Sr. and Jr.

So sad. The airport will be an economic boon for southern Cook County and Will County alike.

I would much rather see the South Suburbs become the destination for businesses in the coming decades. For too long we have traveled north to spend our money, and we have spent much while shopping north of I-80. It’s time for businesses to come back home.

My emailed response to Kristen McQueary:

Your commentary on the proposed third airport and your decision to dredge up any disparaging reference you could regarding Rev. Jesse Jackson and his son, Congressman Jesse Jackson, Jr., could not be more off-base.

The fact is, the South Suburbs need an economic engine to draw the attention of the business community south of I-80. The Southtown Star’s offices are in an area with a much stronger business base than those of us in Park Forest and surrounding communities.

As a journalist, I understand that it is easy to criticize pols and others. Your efforts to belittle Rev. Jackson and the Congressman, however, were ill-placed. Frankly, I’m glad to have the voice of Rev. Jackson on board as we move toward what will hopefully be a final push towards seeing the Abraham Lincoln National Airport take wing. His is a strong voice. That you cannot ignore, even as you bend over backwards to drag his name through the mud.

How many of your readers get in their cars every morning and drive an hour-and-a-half or more to work in Chicago or the north west suburbs, or take Metra into Chicago? Would your readers not benefit from an economic engine driving business south? Wouldn’t that be wonderful for our local economy? Take a look around you when you get out of your car the next time you go to the office in Tinley Park. Wouldn’t it be wonderful if Park Forest, Chicago Heights, Richton Park, Matteson, University Park, Peotone and other towns in our area were able to enjoy such a business base?

ALNAC is anything but a joke. There are foreign investors ready to spend money here, in the United States, and make this dream come true.

For the benefit of your readers, stop standing up for the status quo, and help make it happen. 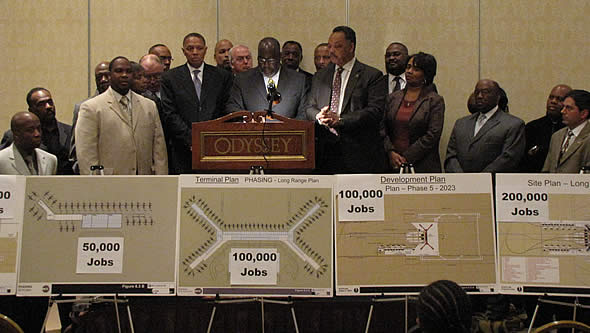