Remembering 9/11 was different for me this year. Actually, it was quite the moment of Zen.

One of our students led us in a moment of silence during morning prayers at Marian Catholic. For some reason, during that silence, memories of the awesomeness of that day, an experience almost beyond comprehension, came flooding back. Suddenly I found myself a bit choked up, and began remembering my classroom at the time. I was standing right in front of the chair my student aide, Erik Glenna, had sat in as we watched the towers fall on television.

I remembered looking at Erik as the class watched the towers burn, saying, “They’ll never put that out.” That was the only thought I had at the time. Erik was a Paid On Call firefighter at the time. I recall he just looked at me.

Then the first tower fell. Some time later, the second. And then we heard about the Pentagon, and Flight 93 in Pennsylvania.

The moment of silence ended. The student leading the school then said a prayer, and then led us in the Pledge of Allegiance. I found myself unable to recite. I just stared at the flag as the magnitude of that day returned.

I went on with class, and, at the end of the first period, accompanied the students to the west gym for our beginning-of-the-year Mass. It was helpful to have the opportunity to spend some time in reflection.

The liturgy concluded, and the students returned to class for second period. Classes were shorter Friday because of the liturgy. I spent most of the period preparing my seniors for their Monday test. Near the end of the period, I looked out my classroom door, my jaw dropped, and I froze.

My former student aide from eight years ago, Erik Glenna, was standing in the hall.

My memories of September 11, 2001 rushed back again. I opened the classroom door, and Erik and I gave each other a big hug.

I have one word for how I felt at that moment, and I’ll happily credit Erik for summarizing it: “Verklempt.” Once again, I got all choked up.

Erik came into my class, and I introduced him to my seniors. It turns out he had almost the exact same reaction that morning while watching President Obama on television speaking at a 9/11 memorial service, remembering where he was seated in my classroom. He said he had to come back.

This year, for some reason, was different.

So, we spent time chatting. The next class was my free period. We sat down for coffee and conversation. We had last seen each other at a Marian Catholic Homecoming game a few years ago, so it was nice to chat. Erik works in a steel mill now, but is still pursuing art. He had been commissioned to paint five panels outside the swimming pool at Governors State University. I’ll have to get over to see them. I encouraged him to get involved with the Tall Grass Arts Association.

All in all, it was good to catch up with an old friend.

Was 9/11 different this year? After listening to this story at the Park Forest Art Fair Saturday, Artist Patricia Moore suggested that perhaps we are starting to look at the horrible events from September 11, 2001, differently. 9/11 had become politicized under President Bush, Ms. Moore asserted, and perhaps we are considering that tragic day and its aftermath from a new place, under a new president. Perhaps it’s sinking in differently all over again.

But the experience for me this year was surreal. Quite the moment of Zen. 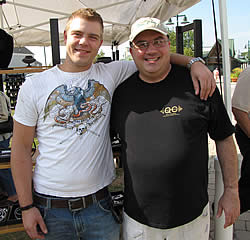