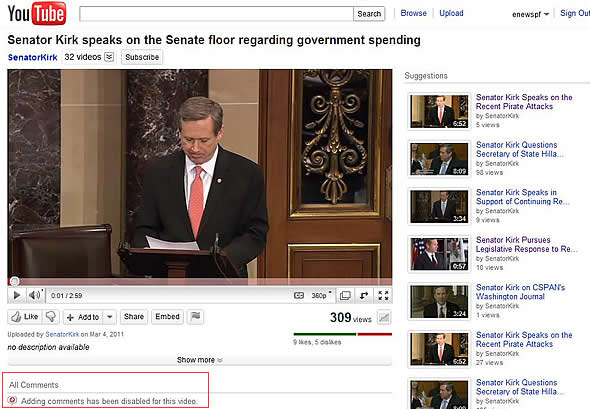 U.S. Senator Mark Kirk has something he wants you to hear and see, but he’s not interested in anything you say.

Received an email from Mark Kirk this afternoon asking me to go to YouTube and view the senator addressing his colleagues, commenting that the United States is spending too much money. Looked for the familiar "All Comments" box, only to see read, "Adding comments has been disabled for this video."

I checked his other videos, only to see the same message.

Still, it strikes me as odd for a pol to limit public discussion in such an obvious manner. Is Mark Kirk afraid of a little heat? Or is he not interested in what his constituents have to say? Why lessen the ways people can make contact?

My response to the junior senator from Illinois would have been something like this: Senator, study a little history. Yes, the government spends a lot of money. Yes, the government borrows a lot of money. However, the massive acceleration of the borrowing AND spending happened under three G.O.P. presidents: Reagan, and both presidents Bush. It continues under president Obama because the most recent G.O.P. president drove us into a deep, deep ditch AND grew the government, astronomically increasing spending while cutting income.

You want to pay some of those bills, "pay down the debt?" That was Bill Clinton’s mantra, "Pay down the debt." And he did so. Discretionary spending only accounts for as much as 17% of the United States budget. If you can’t pay your bills, then tax your friends who can pay their bills, the ones who buy islands, jets and yachts. Roll back the taxes at least to the Reagan era. And read up on the Great Depression and the New Deal.

Senator Kirk, less myopia please. It appeared during the campaign that you were reasonable. Please study the issues and cease with the worship of ideology over facts.

That’s what I would have said under Senator Kirk’s YouTube video, given the chance.