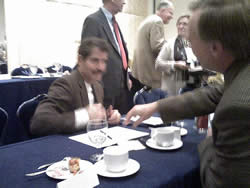 As I’ve written before, I met John Stossel a couple of years ago at the Annual Meeting of the Inland Press Association. He spoke at a luncheon about his strong, no, radical, Libertarian leanings. I do not watch 20/20, so I’m not going to claim that I really know John Stossel. I just remember one strange story he told.

Referring to a “study” he conducted at an ice rink for 20/20, he described how his crew filmed people at skating one day. Left completely alone, Stossel argued that the ice rink was successful because it was essentially “deregulated.” People skated harmoniously, staying out of each other’s way, and all was well. Left to their own devices, Stossel argued, people do quite well, and don’t need rules or regulations imposed from some independent authority.

How did he know this? His next move was to appoint someone to “regulate” the ice rink, giving direction to the skaters, telling them individually where to skate, when to turn. The result, Stossel argued, was disaster. A “regulated” ice rink was nothing more than mass confusion, with skaters colliding, tripping and falling over.

Stossel then wanted us to make the incredible leap of faith with him and conclude, as did he, that the skating rink is just like the business world. Left alone, the so-called free market does very well, regulates itself, and businesses thrive. Impose regulation, and the system collapses.

I couldn’t help but think, at the time, that the original supposedly “deregulated” ice rink Stossel observed was entirely regulated. First, there were walls around the rink. Second, to get on the ice, you had to wear ice skates. When it was time to do maintenance to the ice, all skaters had to leave the ice so the zambonis could run. While human beings were on the ice, the zambonis were off the ice, with keys secured, no doubt.

If the ice rink were really deregulated, there would be no walls. People would be coming and going, some with skates, some without. No doubt some children–and adults–would have a wonderful time on the slick, fast surface wearing gym shoes. Some would bring sleds. And remember the zambonis? It would be a free-for-all. With no regulations, who wouldn’t want to take a turn driving the zamboni over the ice while children scrambled to get away? And how long would it take for people with snow mobiles to discover this sweet, frozen paradise? Imagine how wonderful a truly deregulated ice rink would be?

Well, that was then. Recently, Stossel has taken to arguing that businesses should be so deregulated that the Civil Rights Act of 1964 should not apply to them, that free speech, the First Amendment, gives businesses the right to discriminate.

The following is from Media Matters for America, and I am happy to reproduce it here. Please take action:

On Wednesday, Rand Paul, the GOP’s US Senate candidate for Kentucky repeated his claim that a central piece of the Civil Rights Act of 1964 was wrong, and that businesses should be free to discriminate against whomever they please.1 Paul and his supporters don’t seem to care that without federal intervention, Black people might still be second-class citizens in most aspects of American life: where we eat, where we work, even where we live.

Then, on Thursday, FOX contributor and business anchor John Stossel went even further than Paul and called for the section of the Civil Rights Act of 1964 that applies to business to be repealed.2 And he’s refused to back down.

While Rand Paul may have started this outrage, he can be taken care of at the ballot box — FOX News can’t.

Stossel’s position is an affront to Black America and everyone in this country who believes in racial progress. It’s one thing to be a candidate with backwards views. It’s another to be employed by a supposed news network and to use that platform to push hateful ideas that our nation repudiated decades ago.

It’s time that FOX drop Stossel. It’s why I’ve joined ColorOfChange.org in demanding Fox do so immediately. If after hearing from thousands of people like you and I, FOX refuses to act, it will make clear that FOX stands with Stossel and his values, and ColorOfChange has pledged to go directly after the network with a major public campaign.

Can you take a moment to add your voice to the call to fire Stossel? After you do, please ask your friends and family to do the same:

FOX has a history of providing a platform for bigoted views and race-baiting. Most recently more than 300,000 people helped us hold FOX accountable by stripping Glenn Beck of more than 100 of his advertisers, after Beck called President Obama a “racist” with a “deep-seated hatred for white people.”3

But Stossel has arguably gone beyond Beck, echoing segregationist arguments from the Jim Crow era:

“It’s time now to repeal that part of the law because private businesses ought to get to discriminate. And I won’t ever go to a place that’s racist and I will tell everybody else not to and I’ll speak against them. But it should be their right to be racist.”

Stossel went on to argue something that history has disproved time and again — that private business will do the right thing, without being compelled by laws, because no one would patronize a business that discriminates. It’s a blind belief in market fundamentalism that just isn’t in sync with reality. In the ’60s, white-owned businesses that allowed Blacks as customers lost business. Market forces actually perpetuated discrimination; they didn’t combat it. Simply put: segregation would still be active in parts of this country if government hadn’t stepped in.

And recent history has shown that the public accommodations section of the Civil Rights Act is still needed. In 1994, it was used to hold Denny’s Restaurants accountable, after the chain repeatedly refused to seat Black customers.4 Just last year, it was used to go after a Philadelphia pool that prevented Black children from swimming there.5

It’s time for Fox News to make a choice. Are they willing to continue to give a platform to racially-divisive rhetoric and revive dangerously outdated perspectives? Or will they move with the rest of the nation into into the 21st century? Please join me in calling on Fox News to fire John Stossel. And once you do, please ask your friends and family to do the same: