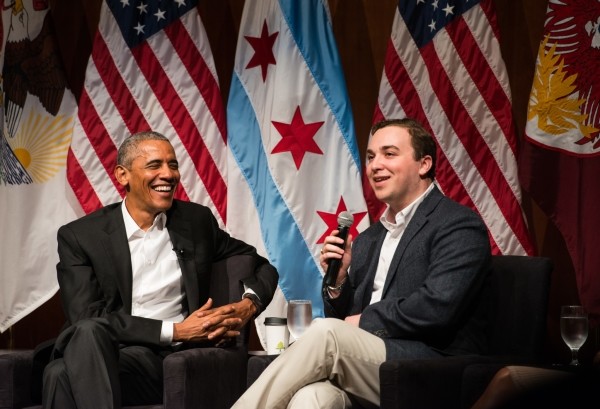 Former President Barack Obama returned to the University of Chicago to discuss a key priority for his time after the White House—helping to inspire and prepare the next generation of civic leaders.

On Monday, the former president gathered on stage at UChicago’s Reva and David Logan Center with students from around Chicago for his first public event since ending his second term in January. In a wide-ranging conversation, Obama talked about his own introduction to public service as a community organizer on Chicago’s South Side and asked students from schools including UChicago and Kenwood Academy about their own involvement in civic engagement and how to create new ways for their peers to participate. Obama was introduced by UChicago second-year student Richard Omoniyi-Shoyoola, and the student panel included UChicago third-year Max Freedman.

“I’m spending a lot of time thinking: What is the most important thing I can do for my next job?” Obama said. “And what I’m convinced of is that although there are all kinds of issues I care about and all kinds of issues I intend to work on, the single-most important thing I can do is to help, in any way I can, prepare the next generation of leadership to take up the baton and take their own crack at changing the world.”

The event was a homecoming for Obama, who taught constitutional law, voting rights, and racism and the law at the University of Chicago Law School for more than a decade before being elected to the U.S. Senate in 2004. He took the stage and asked the crowd of mostly local students: “So what’s been going on while I’ve been gone?”

But the nearly 90-minute discussion didn’t touch on current events. Instead, the former president spent most of the time asking questions of the young people, while talking about his own climb from community organizer to U.S. president. Obama also highlighted certain problems he sees such as the gerrymandering of Congressional districts and the influence of money in politics.

“I have been encouraged everywhere I go in the United States—but also everywhere around the world—to see how sharp and astute and tolerant and thoughtful and entrepreneurial our young people are,” Obama said. “So the question then becomes: What are the ways in which we can create pathways for them to take leadership, for them to get involved?”

At one point, the former president and Max Freedman, a third-year student at UChicago, explored how to get people of different views talking to each other rather than just talking with those who have similar views. Freedman, a College Republican who worked in Iowa during last year’s caucuses, talked about an “empathy gap” that currently exists and the challenges that former U.S. Sen. Richard Lugar, R-Indiana, faced for serving as a mentor to Obama.

“It’s not just that we’re reading different news, but we don’t talk to each other anymore,” Freedman said. “Civic engagement at some point will require a level of civility.”

At the end, the former president took questions from the young men and women gathered on stage, dispensing advice as they face their own challenges as they work to become involved in civic life.

Obama drew laughs as he advised one panel member to leave his clipboard at home when doing community surveys. Nothing causes people to run faster than when they see a clipboard, he joked.

The former president also reflected on his own political journey, something Obama said he is doing a lot of lately, as he writes a book on it. One insight is don’t do something just because it’s the next step. Obama said that approach was a major reason why he failed in his first run for Congress on Chicago’s South Side.