Illinois Activists Announce a Two-Week, 200-Mile March From Chicago to Springfield for a State Budget That Works 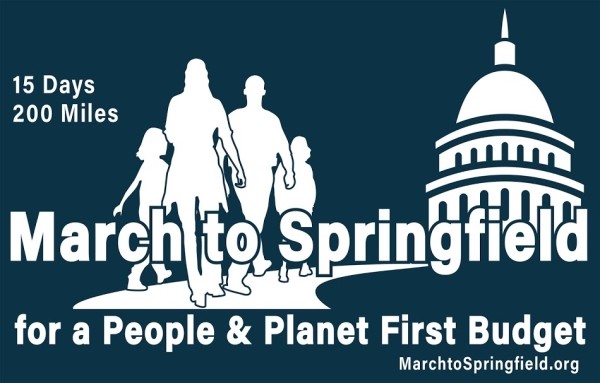 CHICAGO –(ENEWSPF)–May 6, 2017.  Marchers ranging in age from 23 to 90 years old from diverse Chicago communities, will walk 200 miles to Springfield asking people along the route about how the state’s budget crisis impacts them.

The marchers will stop in suburban and rural communities to listen to people and build support for a budget that puts people and planet ahead of corporations and billionaires.

The March to Springfield is organized by Fair Economy Illinois. The march starts at noon May 15 with about 25 people, more are expected to join along the route.

Illinois has one of the most regressive tax structures in the country: most corporations pay no income tax to the state, and billionaires pay the same income tax rate as senior citizens on social security. Illinois is a microcosm of what’s in store for the nation under the Trump tax plan: Public education, infrastructure and the social safety net are in shambles.

“When I was young, rich people and corporations paid their fair share of taxes, and government used that money to invest in people,” said 90-year old Alfred Klinger. “I’m a World War II veteran, and the GI Bill paid for me to go to medical school, allowing me to serve my community as a physician for 45 years. Government should make these kinds of big investments in every generation.”

Illinois, the nation’s fifth largest state, has been without a budget for two years.

“Springfield has abandoned us, and we deserve better,” said Samantha Nichols, a pastor- in-training who plans to march. “Our People and Planet First Budget proposal puts hundreds of thousands of people back to work doing the things that will improve our lives and strengthen our communities.”

Fair Economy Illinois is a statewide alliance of urban, suburban and rural residents to fight the power of corporations and private interests in state government and to demand Illinois leaders invest in the common good.

People’s Action was formed last summer in a rare merger of five national organizations, each with decades of organizing and activism history, creating one of the largest grassroots, people-powered networks in the country. People’s action is more than a million people across 30 states working for economic, racial, gender and climate justice – and to ensure everyone a voice in our political system.