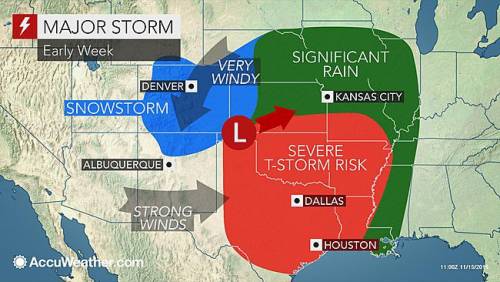 By Jordan Root,
Meteorologist for AccuWeather.com

AccuWeather-(ENEWSPF)-  AccuWeather reportsthe second storm in less than a week will hit Colorado and parts of Nebraska and Kansas with blizzard conditions and dangerous travel during Monday night and Tuesday.

The storm has the potential to bring a foot of snow not only to the central Rockies, but also to a large part of the adjacent High Plains.

Cities that will be hit hard by snow and wind include Denver, Colorado Springs and Pueblo, Colorado; Cheyenne, Wyoming; Goodland, Kansas; and North Platte, Nebraska.

According to AccuWeather Meteorologist Becky Elliot, “The combination of this heavy snow falling and very strong wind gusts will create blizzard conditions.”

Snowfall rates of 1 to 2 inches per hour are possible at times. At the same time, wind gusts of 40 to 50 mph can occur. Gusts topping 70 mph can occur over the passes.

Conditions will deteriorate quickly over the mountains and foothills of Colorado to northern New Mexico as snow and wind are expected to increase in intensity throughMonday night. Travel could become very difficult in portions of Interstate 70 and Route 50 through the Colorado Rockies.

Snow will initially melt on the pavement over the Interstate-25 corridor on Monday night. However, as temperatures plunge below freezing and the rate of snow increases, road conditions will become slushy and snow-covered by early Tuesday.

The heavy snowfall rate and blizzard conditions will expand eastward through the route 287 and 83 corridors of Colorado, Kansas and Nebraska during the day Tuesday. Meanwhile, snow will taper off in Denver on Tuesday.

During Tuesday afternoon and Tuesday night, windswept snow and slippery travel will advance across central areas of Kansas and Nebraska, including along portions of I-70 and I-80.

Blowing and drifting snow will spell out trouble for people who plan on driving during this time. Visibility will be greatly reduced on area roadways. Drivers are urged to reconsider travel plans due to the dangerous conditions.

AccuWeather RealFeel® Temperatures at the height of the storm will dip into the single digits in the mountains and the teens on the Plains.

The combination of heavy snow and gusty winds will knock some trees down. Some communities may be put in the dark due to power outages.

The storm will spread windswept snow farther south, when compared to the storm last week. Snow with wind will blast portions of southeastern Colorado and northeastern New Mexico.

“A band of heavy snow is likely to set up from southeastern Colorado into southwestern Nebraska, which could produce over a foot of snow in some locations,” AccuWeather Meteorologist Brett Rathbun said.

The storm will spawn severe weather across the southern Plains and bring the risk of flooding to some of the Mississippi Valley states into Wednesday.

In the wake of the storm, temperatures will rebound and snow will melt at lower elevations from the Rockies to the High Plains during the middle of the week.