Washington, DC–(ENEWSPF)–October, 16 2013.  Researchers at the Illinois Department of Natural Resources and the University of Illinois Urbana–Champaign have found that organochlorine pesticides and other organochlorine compounds like polychlorinated biphenyls (PBCs) are still contaminating river otters in the state, even though these chemicals have been banned for decades. Surprisingly, the levels detected are the same or higher than those detected in otters 20 years ago, highlighting the need to understand the exposure 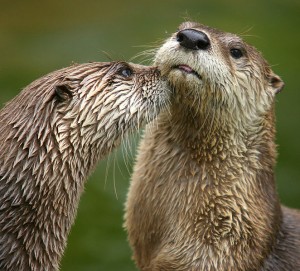 of wildlife and humans to organochlorine compounds despite their ban.

In order to see what chemicals might be affecting otters, if any, the researchers examined the bodies of 23 river otters collected between 2009 and 2011. In the published study, River otters as biomonitors for organochlorine pesticides, PCBs, and PBDEs in Illinois, scientists looked at liver concentrations of 20 organohalogenated compounds once used in agriculture and industry. The average concentrations of dieldrin, an insecticide that was used across the Midwest before being banned in 1987, actually exceeded those measured in river otters collected from 1984 to 1989. Liver concentrations of PCBs and DDE -a breakdown product of the banned DDT – were also similar to those in an earlier study showing that contamination has not decreased over the years. Concentrations of the organochlorine compounds in river otters ranged widely. One male had a concentration of PCBs in its liver of 3,450 parts per billion (ppb), while another had only 30 ppb. Dieldrin concentrations ranged from 14.4 to 534 ppb. The researchers note that since the otters were collected from counties all over Central Illinois, findings could indicate that some watersheds have a worse contamination problem than others. Male river otters had significantly higher concentrations of PCBs compared to females which can be attributed to differences in size between the sexes.

“We don’t know enough about how these contaminants behave synergistically,” Samantha Carpenter, wildlife technical assistant and team leader said, especially since “the cocktail of contaminants that we’re exposed to here in the Midwest differs from what humans and wildlife are exposed to in eastern or western North America.”

Organochlorine pesticides like dieldrin and DDT are extremely persistent in the environment, and have been routinely detected in sediment, waterways, aquatic wildlife and even people. A recent, similar study attributed to DDT the reproductive problems plaguing endangered condors in California, as a result of the birds’ feeding on contaminated sea lions. Despite the fact that DDT was banned in the U.S. 40 years ago, concentrations of this toxic chemical’s major metabolite, DDE, have remained alarmingly high in many ecosystems, including surface waters, the Arctic, and even U.S. national parks. DDT and other persistent organic pollutants (POPs) are resistant to environmental degradation through chemical, biological, and photolytic processes. Because of this, they have been observed to persist in the environment, are capable of long-range transport, bioaccumulate in human and animal tissue, and biomagnify in food chains. Animals with high fat/blubber content have been found to have higher levels of these compounds in their tissue since these compounds are very fat soluble. For instance, one study reported that marine mammals, like dolphins and seals, harbor high concentrations of hazardous chemicals in their brains, including DDT and PCBs.

The comparatively high concentrations of dieldrin found in river otters in Illinois are consistent with findings of the National Water Quality Assessment Program (NAWQA), run by the U.S. Geological Survey (USGS), which reported the highest concentration of dieldrin in fish tissue from the Sangamon River in Illinois, according to the study. Guidelines for dieldrin concentrations in aquatic life were exceeded in 30 percent of the samples from this basin and every concentration of dieldrin detected in this basin was in the highest ten percent of the national NAWQA results. Unfortunately, even though dieldrin is still widely detected in waters and in fish and wildlife, there are currently no fish consumption guidelines for dieldrin in Illinois. Some studies of dieldrin exposure have found links to cancer, Parkinson’s disease and Alzheimer’s, and according to this study, dieldrin and PCBs can act as developmental neurtoxicants, which means that developing fetuses can be harmed at higher concentrations. The U.S. Environmental Protection Agency (EPA)  notes that the chemical decreases immune system function, may cause cancer and birth defects, increases infant mortality, and damages the kidney. Dieldrin can still be detected in certain parts of the Chesapeake Bay  and even in well water.

The important take home here, noted by the researchers, is that the findings from this study are significant as otters serve as local biomonitors for human health, since organochlorine compounds that bioaccumulate in river otters have also been detected in humans who consumed contaminated fish.  In addition, there exists need to study exactly how these contaminants interact with one another within the body.

Previous articleRemarks by President Obama at Presentation of the Medal of Honor to Captain William D. Swenson
Next articleConnecticut College Student-faculty Research Shows Oreos are Just as Addictive as Drugs in Lab Rats