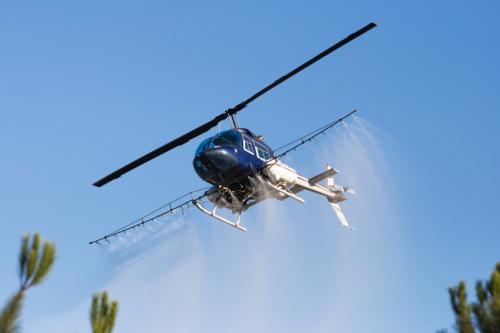 Development of the bill grew out of a series of incidents across Oregon involving residential pesticide exposure and poisoning from aerial spraying of forest lands. The main incident, which spurred state-wide outrage and investigations into the pesticide regulation and enforcement practices of the Oregon Department of Agriculture (ODA), involved Curry County residents who complained of pesticide exposure after witnessing aerial spraying near their homes.

After pressure from local residents, investigative reporters, and environmental groups, ODA was ordered to publicly disclose pesticide records. It was found that the pesticides being sprayed were 2,4-D and triclopyr —information that conflicted with previous statements and reports and adding to the trend of opaque and lackluster ODA enforcement efforts. Eventually, the pilot responsible for the incident had his license suspended for a year and was fined $10,000 and the company that employed the pilot was also fined $10,000 and had all its licenses revoked for a year for providing false information to the state.

In a similar case, the community of Triangle Lake experienced pesticide exposures from the aerial application of herbicides to timberland, and atrazine and 2,4-D were subsequently found in the urine of residents around Triangle Lake. After these incidents, state and federal agencies launched the Highway 36 Corridor Public Health Exposure Investigation. The investigation resulted in the Oregon State Forester requiring pesticide applicators to turn over three years of forestry pesticide spray records from private and state timber operations.

Timing is also ripe for improved environmental and wildlife protections, particularly with regard to salmon streams and drinking water. Within the Pacific Northwest, an area where the timber industry dominates, Oregon’s regulations are some of the least protective. And with recent legal victories, requiring EPA to restore no-spray buffer zones around waterways to protect imperiled salmon and steelhead from five toxic pesticides, the bill would move the state coordination with EPA standards. The bill could also improve Oregon’s chances of receiving approval from EPA and the National Oceanic and Atmospheric Administration (NOAA) for its coastal nonpoint pollution control program.

Join Beyond Pesticides as we continue to learn about the dangers of pesticides and the actions we can take, like the Oregon bill, to establish better protections for people and the environment against pesticide use at the 33rd National Pesticide Forum in Orlando, FL, April 17-18th 2015. Early bird registration is in effect until March 15, so make your plans to register today!