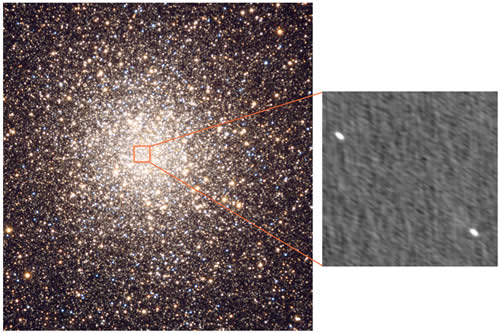 Curtin University-(ENEWSPF)- Astronomers have made the unexpected discovery of two black holes inside an ancient cluster of stars in our galaxy, the Milky Way.

The research, published today in the prestigious journal Nature, describes the detection of two black holes that are about 10 to 20 times heavier than our Sun in the globular cluster named M22.

Black holes, so dense that even light can’t escape them, are what is left when a massive star reaches the end of its life and collapses in on itself.

Co-author Dr James Miller-Jones, from the Curtin University node of the International Centre for Radio Astronomy Research (ICRAR), said the discovery of two black holes in the same cluster was a complete surprise. All the theory up to now says that should not happen in a globular cluster that is 12 billion years old.

“The study was originally searching for just one larger black hole within the cluster of hundreds of thousands of stars which, when viewed from the naked eye, resembles a hazy round ‘puff’ of light,” he said.

“Simulations of how globular clusters evolve show many black holes are created early in a cluster’s history."

“The many black holes then sink towards the middle of the cluster where they begin a chaotic dance leading to most being thrown out of the cluster until only one surviving black hole remains.

“We were searching for one large black hole in the middle of the cluster, but instead found two smaller black holes a little way out from the centre, which means all the theory and simulations need refinement.”

Dr Miller-Jones said the newly discovered black holes are the first to be found in a globular cluster in our galaxy. M22 is about 10,000 light years from Earth but can be seen clearly with a backyard telescope.

“M22 may contain as many as 100 black holes but we can’t detect them unless they’re actively feeding on nearby stars,” he said.

“We plan to do further study to pin down the properties of the two we’ve already found.”

ICRAR is a joint venture between Curtin University and The University of Western Australia providing research excellence in the field of radio astronomy.