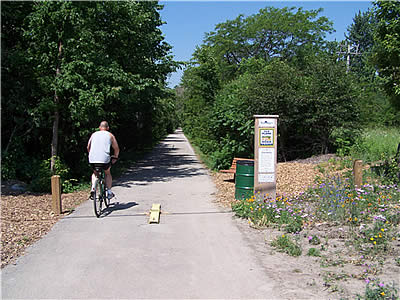 Chicago Heights, IL-(ENEWSPF)- The saying "anything worthwhile is worth waiting for" may well have been coined by a rail-trail builder. As America’s growing community of trail supporters, volunteers, planners and managers can attest to, trails projects often take time. The complex legal, financial and political issues surrounding land ownership and conversion have seen some trails projects take 20 years or more, from vision to fruition.

About 30 miles south of Chicago, in Cook County, Ill., trail advocates are this week celebrating a breakthrough moment in the long-awaited development of the Old Plank Road Trail.

The initial sections of the Old Plank were built in 1997, along the out-of-service Michigan Central Rail Road line. It has since become part of a larger trail known as the Grand Illinois Trail, looping 500 miles through northern Illinois between Lake Michigan and the Mississippi River.

Like many longer trails systems, however, the Grand Illinois Trail has been plagued by a number of missing links–sections of the route without a dedicated non-motorized pathway, where riders and hikers are forced to use road or sidewalk. Over the years, these missing links have been filled in as money and planning allowed.

However, none was more tricky than a short section of less than a mile through the city of Chicago Heights. For the last decade, a continual series of efforts failed to bring about a non-motorized trail along a .8-mile stretch that would have extended the Old Plank Road Trail from where it abruptly ended at Western Avenue, east to an extensive trail system at Thorn Creek and, eventually, to Indiana and the Chicago lakefront via the Pennsy Greenway and Burnham Greenway Trail.

Finally, the end is in sight, with the news this month that the city of Chicago Heights has signed off on a preliminary engineering report for a multi-use trail across the missing link, an event that supporters are describing as an "all systems go" announcement.

As advocates note, it took the terms of four Chicago Height mayors to reach this point. Current Mayor David Gonzalez’s commitment to the project continued the momentum generated by his predecessor, Alex Lopez, and Alderman Willie White. Both Lopez and White have since passed away. The completion of the Old Plank Road Trail will be just part of both men’s significant legacy.

Click the map to see a larger version. (Source: oprt.org)

A federal Communities Putting Prevention to Work grant paid for an Active Transportation Plan for the community, creating widespread acknowledgment of the need for more biking and walking infrastructure in the area. Design costs and the budget for construction have been secured by a Congestion Mitigation and Air Quality Improvement grant, recognition of trails’ tremendous value not only as recreational amenities but also vital transportation solutions in urban areas.

A community working bee late last year in a park at Thorn Creek (right), which was attended by Mayor Gonzalez, was seen by locals as a key moment in galvanizing community energy for the project.

Despite the project looking decidedly like a "no-brainer," Buchtel is conscious that behind every champagne cork moment like this is a core of dedicated people who kept pushing even when there was barely a light at the end of the tunnel. He made special mention of the Illinois Department of Natural Resources, and the National Parks Service Rivers, Trails and Conservation program for continuing to support the project even as it fell in and out of political favor.

"They were stalwart advocates to finish this trail, even as at those times when the city was difficult to work with," he says. "They showed patience and perseverance, making their case and waiting for the leadership in Chicago Heights to start connecting the trail’s benefits with their residents’ needs."

Opposition to the trail came in part from residents who believed that a pathway through the historically poor neighborhood on the south side of Chicago Heights would encourage additional criminal activity in the area. It is a refrain familiar to urban trail proponents. In cities across the country, countless trail projects have been held up by the unfounded concerns that opening up depressed, underserved sections of the city will present a public safety hazard to trail users and neighborhoods nearby.

Yet time and time again, the opposite occurs. Increased foot traffic and community activity has been shown to decrease crime and delinquency, and as trail users, local residents and businesses develop "ownership" of the trail, improvement projects and maintenance transform neglected areas with gardens, parks, murals, orchards and markets.

As a local resident, Diane Banta, who works for the National Park Service Rivers, Trails and Conservation Assistance program, has tremendous enthusiasm for what the completed trail will bring to the people of Chicago Heights, and the broader region.

"It will serve an incredibly important public health purpose by encouraging walking and biking, and it will provide the connectivity that all communities these days are striving for," Banta says. "Not only that, but it makes Chicago Heights the hub of all this trails activity. It’s really very exciting."

Rails-to-Trails Conservancy is excited to be a part of this transformation. This year we will be using funds from our Metropolitan Grants Program, funded by The Coca-Cola Foundation, to install a number of benches along the trail and help with the establishment of a trailside garden.

Related: Is This The Beginning or End of Old Plank Trail?