Washington, DC–(ENEWSPF)–March 26, 2014. Conservation and food-safety groups filed a formal notice of intent to sue the U.S. Environmental Protection Agency (EPA) on Monday for failing to protect hundreds of endangered fish, butterflies and other species from a new, toxic pesticide, cyantraniliprole. The suit claims EPA violated the Endangered Species Act (ESA) by approving the widespread agricultural and residential use of the new pesticide in January without input from the U.S. Fish and Wildlife Service and National Marine Fisheries Service, the two federal agencies in charge of protecting endangered species. 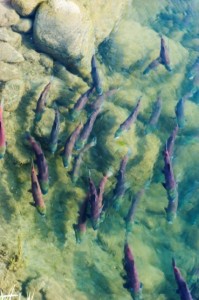 The Notice of Intent to Sue is being filed by the Center for Biological Diversity, Center for Food Safety, and Defenders of Wildlife. Cyantraniliprole, a new, systemic insecticide, was formally registered by the EPA earlier this year. Despite evidence that cyantraniliprole is toxic to honey bees, EPA’s registration document for cyantraniliprole finds that, “There is a reasonable certainty that no harm will result from aggregate exposure to the pesticide residue.” According to EPA’s assessment the pesticide is also slightly to very highly toxic to aquatic organisms. Comments from beekeepers and concerned groups, including Beyond Pesticides, urged EPA not the grant registration, given the toxic nature of the pesticide and the many uncertainties in the ecological data, including outstanding data for long-term honey bee health.

According to the groups,  EPA failed to consider or mitigate impacts to endangered species despite concluding in its assessment that cyantraniliprole is “very highly toxic” to hundreds of endangered aquatic species, such as freshwater fish, mussels and clams, as well as endangered terrestrial invertebrate species, including 20 endangered butterflies. EPA’s failure occurred despite recent collaborative efforts on the part of the EPA and the two federal wildlife agencies —responding to a report from the National Academy of Sciences— to improve its procedures for evaluating the impacts of pesticides on endangered species before approving those chemicals for general use. Right now hundreds of pesticides that adversely affect endangered species are in widespread use without ever having undergone an ESA review.

“Once again the EPA has approved a harmful pesticide without adequate conservation measures to protect endangered species,” said Brett Hartl, endangered species policy director at the Center for Biological Diversity. “This reckless approval of cyantraniliprole really undermines recent efforts to reform the EPA’s dangerous policy of ignoring the disastrous effects pesticides are having on wildlife across the country.”

EPA has routinely disregarded the ESA’s requirement to consult with federal wildlife agencies on how to implement conservation measures to protect threatened and endangered species from pesticides. After years of gridlock, federal wildlife agencies, EPA and the U.S. Department of Agriculture (USDA) asked the National Academy of Sciences to study the issue and report on ways to better protect listed species from the effects of toxic pesticides. The National Academy report identified deficiencies for all the agencies involved in pesticide consultations, but singled out the EPA’s approach for its numerous analytical shortcomings. In response to the Academy’s recommendations, the agency announced several reforms designed to better protect endangered species in the fall of 2013. Yet, EPA did not incorporate any of these reforms or the Academy’s recommendations in its process for approving cyantraniliprole.

“In unlawfully approving cyantraniliprole EPA blew a golden opportunity to fix its faulty pesticide procedures and protect the environment,” said Andrew Kimbrell, executive director for Center for Food Safety. “If you are in a hole, first stop digging. EPA must stop putting pesticides they know are harmful on the market, without addressing their potential harms to wildlife and agriculture.”

Previous lawsuits have been filed to force EPA to uphold its responsibilities under ESA. In 2001,  several stakeholder organizations, including the Northwest Center for Alternatives to Pesticides (NCAP) and the Pacific Coast Federation of Fishermen’s Associations (PCFFA), filed suit to force EPA to fulfill the distinct ESA requirements. Specifically, the lawsuit challenges EPA’s decision to register 54 pesticides without first consulting with federal fish biologists regarding the potential impact on protected salmon and steelhead species in the Northwest. In a lawsuit initiated in 2002, the judge called EPA’s “wholesale non-compliance” with its ESA obligations “patently unlawful” and ordered the agency to consult with the National Marine Fisheries Service (NMFS) regarding adverse impacts on Northwest salmon. More recently, EPA’s failure to consult with FWS on the impacts of hundreds of pesticides known to be harmful to more than 200 listed species prompted a 2011 lawsuit.

Join us at Beyond Pesticides’ 32nd National Pesticide Forum, “Advancing Sustainable Communities: People, Pollinators, and Practices,” in Portland, OR April 11-12. The Forum will focus on improving farmworker protections along with solutions to the decline of pollinators and other beneficial organisms, strengthening organic agriculture, and creating healthy buildings, schools and homes. Space is limited so register now.