Washington, DC–(ENEWSPF)–August 18, 2015.  Research looking at corn production across the Northern Great Plains finds that fields with lower insect biodiversity are at greater risk for pest problems, showing that insect diversity can reduce the need for pesticides, yet again highlighting the critical need for biodiversity in a resilient and sustainable food production system. The research article, Trading Biodiversity for Pest Problems, is published in the July 31 issue of Science Advances, and explores how current chemical-intensive practices have resulted in altered pesticide use patterns, land use intensification, and landscape simplification, all of which threaten biodiversity in and near farms. The findings suggest that farming practices that promote insect biodiversity is  an effective way to control pests without the use of harmful pesticides. 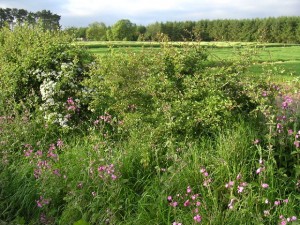 PhD, an economics professor at South Dakota State University looked at insect diversity in cornfields on 53 different eastern South Dakota farms. The researchers evaluate fields that do not use insecticides or crops that are genetically engineered (GE), which may influence corn insect communities. They also specifically identify insect species during the time in the corn’s life cycle when insect communities are most abundant and pest problems, and document relative numbers of 106 taxonomic groups of insects on these farms.

In their analysis, the researchers find that more biodiverse cornfields have fewer pests, and those with high species diversity and an even distribution of species abundance had the least amount of pests. “It is the relationships among herbivores and predators that determines whether corn insect pests will be either controlled by the ecosystem or, if the ecosystem has been diminished, then that will allow the corn insect pest to thrive,” Dr. Fausti said to Minnesota Public Radio (MPR News).

According to the researchers, this is among one of the first studies to quantify the importance of insect networks in fields. While previous research shows that diversity, reducing soil disturbance, increasing crop rotation diversity, and including cover crops are important factors in keeping pests in check, we don’t always have a complete picture of how these practices work to reduce pests. (See yesterday’s Daily News story on the effects of glyphosate on earthworms and soil biota, and Beyond Pesticides’ review of European Academies Science Advisory Council report Ecosystem Services, agriculture and neonicotinoids)

The findings suggests that practices that reduce diversity in cornfields will exacerbate pest problems over time. Interestingly, researchers also note that unnecessary pesticide inputs and simplification of agro-ecosystems are destined to require even more pesticides to replace the lost functions of biodiversity and maintain these food production systems.

Recent trends in agriculture, including less diverse cropping systems coupled with a significant increase in pesticide use on the major crops like corn and soybeans, significantly threaten biodiversity. Corn is one of the most intensively produced crops in the U.S., covering about 5 percent of the land surface in this country, according to the authors. The study authors estimate that, in 2013, U.S. farmers spent $3.2 billion to control corn pests. Systemic insecticides, particularly neonicotinoids, are commonly used on those crops even if there is no pest threat, creating devastating effects on organisms that provide ecosystem services including natural pest control and pollination. The results suggest that farmers may need to use less or eliminate pesticides once they understand how biodiversity works in farm fields.

“Long-term food security is contingent on inventing production systems that are resilient to stressors like pests,” wrote the authors in an article published in The Conversation. “Biodiversity within food systems provides quantifiable and valuable services to society, of which pest management is one.”

Research strongly indicates that biodiversity promotes environmental productivity, stability, and resilience. In general, the soil community with greater biodiversity generates more biomass (the combined weight of all organisms), is more resistant to environmental disturbances, such as drought, and bounces back more quickly after being affected by such disturbances. Beyond Pesticides’ report, Preserving Biodiversity, As if Life Depends on it, notes that by targeting individual species –both as commodities to produce and pests to attack– chemical-intensive practices sacrifice the benefits of biodiversity and jeopardize the very species that comprise it. While causing harm to biodiversity, chemical-intensive strategies in agriculture are not proven to be necessary in light of effective organic practices.

Beyond Pesticides has long advocated for organic management practices as a means to foster biodiversity, and research shows that organic farmers do a better job of protecting biodiversity than their chemically-intensive counterparts. Instead of prophylactic use of pesticides and scheduled sprays, responsible organic farms focus on fostering habitat for pest predators and other beneficial insects, set action levels for pests based upon monitoring, and only resort to judicious use of least-toxic pesticides when other cultural, structural, mechanical, and biological controls have been attempted and proven ineffective. The conservation of biodiversity is both a core premise of organic land management. For more on how organic management preserves biodiversity, visit Beyond Pesticides’ organic agriculture webpage. For a hands on approach on how you can protect biodiversity, see Do-it-Yourself Biodiversity.