RAL Space-(ENEWSF)- Scientists from RAL Space at the Rutherford Appleton Laboratory have solved a lunar mystery and their results might lead the way to determining if the same mechanism could be artificially manipulated to create safe havens for future space explorers. Their work focussed on the origin of the enigmatic "lunar swirls" – swirling patches of relatively pale lunar soil, some measuring several tens of km across, which have been an unresolved mystery – until now.

In the Apollo era it was realised that lunar swirls were associated with localized magnetic fields in the lunar crust (so-called lunar ‘magnetic anomalies’).

Using a combination of the space data and laboratory scale experiments using a “Solar Wind Tunnel” – the team were able to identify how such small scale magnetic “bubbles” were more efficient in deflecting the solar wind particles  bombarding the moon.

“When we first tried the experiment in the Solar Wind Tunnel and it worked, it was very exciting.” says lead scientist Dr. Ruth Bamford of the Centre for Fundamental Physics and RAL Space at the Rutherford Appleton Laboratory.

"The active force which deflect the solar wind particles is electric not magnetic. The electric field is created naturally by the edges of the moon’s magnetic ‘bubbles", Dr Bamford explains. "What matters is the "gradient" in the magnetic field, rather than the overall size of the magnetic bubble. So they can be as small as you like – as long as the gradient is steep enough."

Understanding how "mini-magnetospheres" produce a cavity in the solar wind and exclude the interplanetary magnetic field might lead the way to determining if the same mechanism could be artificially manipulated to create safe havens for future space explorers.

“We still need to determine quite how effective this mechanism would be at deflecting the real hazardous higher energy particles. The jury is still out on that one, but such an active shield could make the difference between survivable and certain death for astronauts on their way to Mars”.

The lunar soil was originally white but is known to have is been darkened over time by exposure to the charged particles of the "solar wind".

It has long been thought that the swirls were a result of magnetic shielding of the lunar surface from the solar wind, but nobody understood how the relatively weak magnetic fields associated with lunar swirls could sufficiently protect the moon’s surface over hundreds of millions of years to prevent surface darkening and produce such finely detailed patterns.

According to Dr. Bamford, "Close to the moon’s surface, the strength of a magnetic anomaly is likely to be very irregular, featuring overlapping "cavities" and "gradients".  We cannot know the precise arrangement without going there to see for ourselves", but the result on the surface would be a corresponding pattern of retarded and accelerated "space weathering", visible as areas of lighter material separated by darks "lanes".  Over an estimated 3.8 billion years these anomalies would have been deflecting the solar wind particles streaming in from space, slowly creating these amazing patterns, which can be clearly seen on the lunar surface today.

The idea was confirmed by experiments done in the laboratory with the University of York in the U.K. using their "Plasma Wind Tunnel".  The particles generated were indeed "corralled" by a narrow electrostatic field, so protecting areas of the exposed surface.

The interaction of the solar wind with the magnetic field anomalies have been shown, to be effective enough to create protected voids above the surface of the moon, sufficient to stave off against weathering caused by the bombardment of solar particles. 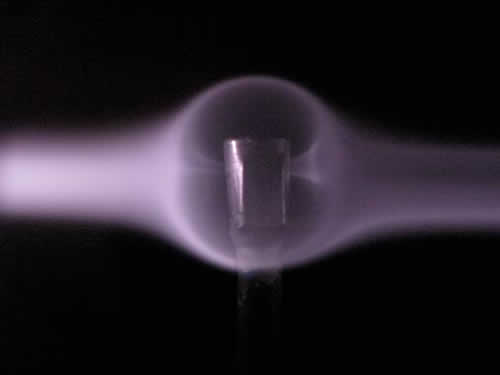 This image shows a truly miniature, magnetosphere recreated in the laboratory. The plasma “bubble” shown here is a mere inch across in total. The purple glow, seen in the photograph, is the stream of super-heated hot gas particles (plasma) of the Solar Wind Tunnel. You’d expect this stream to scorch the metal target. Without a magnetic field it would. But the experiment shows how instead what happens is a thin barrier or “skin” is formed of the plasma itself, within which a tiny cavity in the pseudo- solar wind is formed, which holds back the hazardous particles, so protecting the target except for at the magnetic poles. On the moon this cavity formation prevents the bombarding particles of the solar wind from weathering or darkening the surface color, keeping it white. The barrier width is about 100th the width that such a weak magnetic field (known to exist on the Moon’s surface) could possibly bend a heavy, fast moving, positively charged proton ion out of the way. So something else must be deflecting the ions into such a narrow "skin". That is an electric field the origin of which although complicated has been theoretically determined by the team and found to match the values seen in space by spacecraft and in the laboratory recreation.

Details are to be published in the scientific journal Physical Review Letters and at Physics Archive  http://arxiv.org/abs/1207.2076.

This work is thanks to the support from RAL Space, Space Weather initiatives and the Center for Fundamental Physics.