Washington, DC–(ENEWSPF)–June 30, 2015. As the Monarch butterfly suffers serious decline, the U.S. Environmental Protection Agency (EPA) is considering the role of herbicides in killing the iconic species’ food source, milkweed, and developing an action plan that may fall short. The agency identified possible action that it may take to slow the Monarchs’ decline in a document released last week entitled Risk Management Approach to Identifying Options for Protecting the Monarch Butterfly (Monarch Approach document). EPA’s approach to Monarch conservation comes shortly after the White House released its National Pollinator Health Strategy, intended to “reverse pollinator losses and help restore populations to healthy levels.” The U.S. Fish and Wildlife Service is also in the midst of conducting a review of the Monarch butterfly to determine whether the species is eligible for protection under the Endangered Species Act. 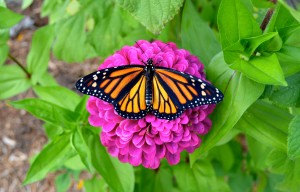 The number of Monarchs reaching their winter breeding grounds in Mexico has fallen by 90% in less than 20 years. This year’s population was the second lowest since surveys began two decades ago. The critical driver of this decline has been linked to the loss of milkweed, the only plant on which Monarchs will lay their eggs, along their migration route, which runs through the Midwestern Corn Belt. This area is well-known for the monoculture planting of genetically engineered (GE) crops developed to tolerate repeated herbicide applications. GE agricultural practices require the broad scale, routine spraying of herbicides on cropland in order to control weeds. The destruction of natural habitat both in and around fields where these herbicides are applied has resulted in unprecedented milkweed declines. Corn and soybean fields in the Corn Belt have lost 99% of their milkweed since just 1999.

Environmental and wildlife conservation groups have singled out the use of glyphosate (Roundup) herbicides as the main threat to Monarchs and milkweed within these GE agricultural systems. The Center for Food Safety’s recent report, Monarchs in Peril: Herbicide-Resistant Crops and the Decline of Monarch Butterflies in North America, focuses on glyphosate, recently classified as a carcinogen, because it is used to treat millions of acres of herbicide-tolerant GE crops. In a similar vein, the Natural Resources Defense Council petitioned the EPA to review the use of glyphosate, and impose restrictions on its use. The agency recently rejected the group’s petition, noting that “the agency at this time has not determined that glyphosate causes unreasonable adverse effects to the monarch butterfly.” This is a bit of word-play on the part of the agency. The Monarch Approach document indicates that “direct effects” of herbicides to monarchs will be analyzed by the agency’s pesticide risk assessment framework, while “indirect effects”, including loss of milkweed plants, will be addressed by the Monarch Approach document under which it is now soliciting public comment.

In its Monarch Approach document, EPA claims that if it were to take regulatory action on one herbicide to protect monarch resources, such a move may shift the market to other herbicides not subject to the same risk mitigation measures. The agency asserts that “its efforts should not be limited to looking at just one or two herbicides, but across a number of herbicides.” While this goal is laudable taken on its face, the ultimate actions stemming from this Monarch Approach document must adequately address the threat a range of herbicides pose to monarch habitat.  The Monarch Approach document’s list of possible actions includes “requiring changes to pesticide label instructions, such as: lowering the rates, decreasing the frequency; modifying the timing of applications; or establishing spray drift buffers in fields that are treated with pesticides in order to protect critical milkweed resources.” EPA indicates that these practices may complement other conservation efforts aimed at education and increasing wildlife habitat.

It is important for the public to read EPA’s Monarch Approach document and provide a public comment on the agency’s potential actions to address monarch declines. Ultimately, as with the crisis impacting managed and wild bees, pesticide label changes and a focus on loss of habitat will not adequately address the magnitude of these declines. An effective approach to truly restoring the habitat of Monarchs and other pollinators must place an emphasis on comprehensive and systematic practices to grow food responsibly. Such an approach must go beyond looking at habitat as a singular factor in Monarch declines. It must provide a framework for farmers to foster biodiverse habitats for plants, pollinators and other wildlife. It must eschew GE systems and conventional practices which are inherently antagonistic to diversity, and rely upon monoculture plantings and other toxic pesticide use. The agency already has a model in organic agriculture that it can draw upon. Organic farmers are required to set aside wildlife habitat, and they incorporate more diversity of vegetation through the use of cover crops, crop rotation, and other cultural practices. Fostering plant diversity ultimately fosters animal diversity, including but not limited to, Monarchs.

Beyond Pesticides supports organic agriculture as effecting good land stewardship and a reduction in hazardous chemical exposures. The pesticide reform movement, citing pesticide problems associated with chemical agriculture, from groundwater contamination and runoff to drift, views organic as the solution to a serious public health and environmental threat. To attract beneficial insects like monarchs and protect their habitats in your own backyard, there are several steps you can take. Like any other living organism, pollinators need food, water, and shelter in order to thrive. For more information, see Managing Landscapes with Pollinators in Mind and Hedgerows for Biodiversity: Habitat is needed to protect pollinators, other beneficial organisms, and healthy ecosystems. You can also visit the BEE Protective Habitat Guide and Do-It-Yourself Biodiversity for more ways in which you can protect monarchs and other pollinators.

At the same time, Take Action by signing the petition urging EPA to suspend neonicotinoid pesticides, which threaten both honey bees, wild pollinators, and Monarch butterflies.

Read EPA’s Monarch Approach document and provide a unique public comment. Contact Beyond Pesticides at [email protected] or 202-543-5450 for help in crafting your statement.