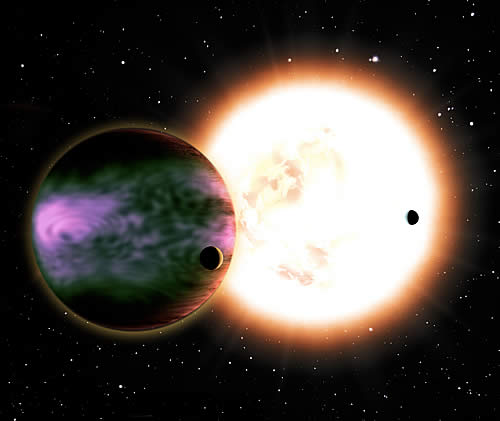 This artist’s conception shows a “hot Jupiter” and its two hypothetical moons with a sunlike star in the background. The planet is cloaked in brilliant aurorae triggered by the impact of a coronal mass ejection. Theoretical calculations suggest that those aurorae could be 100-1000 times brighter than Earth’s. Credit: David A. Aguilar (CfA)

Cambridge, MA-(ENEWSPF)- Earth’s aurorae, or Northern and Southern Lights, provide a dazzling light show to people living in the polar regions. Shimmering curtains of green and red undulate across the sky like a living thing. New research shows that aurorae on distant "hot Jupiters" could be 100-1000 times brighter than Earthly aurorae. They also would ripple from equator to poles (due to the planet’s proximity to any stellar eruptions), treating the entire planet to an otherworldly spectacle.

"I’d love to get a reservation on a tour to see these aurorae!" said lead author Ofer Cohen, a SHINE-NSF postdoctoral fellow at the Harvard-Smithsonian Center for Astrophysics (CfA).

Earth’s aurorae are created when energetic particles from the Sun slam into our planet’s magnetic field. The field guides solar particles toward the poles, where they smash into Earth’s atmosphere, causing air molecules to glow like a neon sign. The same process can occur on planets orbiting distant stars, known as exoplanets.

Particularly strong aurorae result when Earth is hit by a coronal mass ejection or CME – a gigantic blast that sends billions of tons of solar plasma (electrically charged, hot gas) into the solar system. A CME can disrupt Earth’s magnetosphere – the bubble of space protected by Earth’s magnetic field – causing a geomagnetic storm. In 1989, a CME hit Earth with such force that the resulting geomagnetic storm blacked out huge regions of Quebec.

Cohen and his colleagues used computer models to study what would happen if a gas giant in a close orbit, just a few million miles from its star, were hit by a stellar eruption. He wanted to learn the effect on the exoplanet’s atmosphere and surrounding magnetosphere.

The alien gas giant would be subjected to extreme forces. In our solar system, a CME spreads out as it travels through space, so it’s more diffuse once it reaches us. A "hot Jupiter" would feel a stronger and more focused blast, like the difference between being 100 miles from an erupting volcano or one mile away.

"The impact to the exoplanet would be completely different than what we see in our solar system, and much more violent," said co-author Vinay Kashyap of CfA.

In the model, a CME hits the "hot Jupiter" and weakens its magnetic shield. Then CME particles reach the gas giant’s atmosphere. Its aurora lights up in a ring around the equator, 100-1000 times more energetic than Earthly aurorae. Over the course of about 6 hours, the aurora then ripples up and down toward the planet’s north and south poles before gradually fading away.

Despite the extreme forces involved, the exoplanet’s magnetic field shields its atmosphere from erosion.

"Our calculations show how well the planet’s protective mechanism works," explained Cohen. "Even a planet with a magnetic field much weaker than Jupiter’s would stay relatively safe."

This work has important implications for the habitability of rocky worlds orbiting distant stars. Since red dwarf stars are the most common stars in our galaxy, astronomers have suggested focusing on them in the search for Earthlike worlds.

However since a red dwarf is cooler than our Sun, a rocky planet would have to orbit very close to the star to be warm enough for liquid water. There, it would be subjected to the sort of violent stellar eruptions Cohen and his colleagues studied. Their future work will examine whether rocky worlds could shield themselves from such eruptions.


In this animation, stunning aurorae ripple around a “hot Jupiter.” When a stellar eruption known as a coronal mass ejection hit the planet, it triggered these aurorae, which are the planetary equivalent of Earth’s Northern and Southern Lights. However, this exoplanet’s aurorae shine up to a thousand times brighter than Earth’s, and extend from the equator to the poles. Animation created by Hyperspective Studios. Credit: CfA

This research has been accepted for publication in The Astrophysical Journal and is available online.

Headquartered in Cambridge, Mass., the Harvard-Smithsonian Center for Astrophysics (CfA) is a joint collaboration between the Smithsonian Astrophysical Observatory and the Harvard College Observatory. CfA scientists, organized into six research divisions, study the origin, evolution and ultimate fate of the universe.