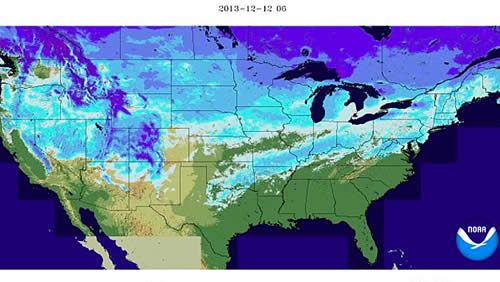 AccuWeather.com-(ENEWSPF)- AccuWeather.com reports those hoping for a white Christmas this year could be in luck, even in a few areas where Dec. 25 snowfall would normally be nothing more than wishful thinking.

As of Dec. 12, measurable snow covered 58.6 percent of the United States, compared to 30.8 percent on the date last year.

"Last year was a little bit below normal and this year is a little bit above normal, so it looks pretty dramatic in comparison to each other," AccuWeather.com Expert Senior Meteorologist Mark Paquette said.

Overall, the current snowpack marks the most extensive coverage for the date in the past five years.

The extensive snow coverage is due largely in part to surges of Arctic air that have settled over the United States.

"Basically the flow of air has been due north with very little westerly component," Paquette said. "The Arctic air just keeps getting replenished. As long as it stays north and not west, it will keep coming down in waves."

The cold air allowed early wintry precipitation to occur last week in some unusual areas, including parts of Texas, Oklahoma and Arkansas. The swath eventually stretched farther east into the mid-Atlantic.

The storm, which began early on Dec. 5, is responsible for a significant percentage of the nation’s coverage.

The percentage of U.S. snow cover for Dec. 11, 2013, trumps even last year’s coverage of 51.1 percent for Christmas Day, two weeks farther into the season than the current date.

Another storm arriving this weekend will bring snow to the Ohio Valley and Northeast, bolstering the region’s snowpack. Meanwhile, snow, rain or a wintry mix is forecast along the I-95 corridor of the mid-Atlantic.

Despite this, a sudden warmup at the start of the Christmas week could threaten the odds of a white Christmas for portions of the South and East.