Fireworks Over Mars: The Spirit of 76 Pyrotechnics (Video/Story) 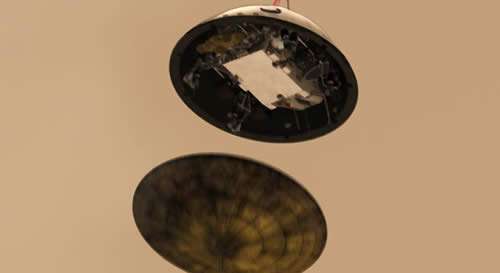 One month and a day after America celebrates its independence with fireworks, a series of meticulously-engineered fireworks must operate for the Curiosity rover to safely reach the surface of the Red Planet as shown in this artist’s concept. Image credit: NASA/JPL-Caltech

NASA-(ENEWSPF)- One month and a day after celebrating its independence with fireworks exhibitions throughout the country, America will carry its penchant for awe-inspiring aerial pyrotechnic displays to the skies of another world. Some pyrotechnics will be as small as the energy released by a box of matches. One packs the same oomph as a stick of TNT. Whether they be large or small, on the evening of August 5th (Pacific time), all 76 must work on cue as NASA’s next Mars rover, Curiosity, carried by the Mars Science Laboratory, streaks through the Red Planet’s atmosphere on its way to a landing at Gale Crater.

"We are definitely coming in with a bang – or a series of them," said Pete Theisinger, Mars Science Laboratory project manager at NASA’s Jet Propulsion Laboratory in Pasadena, Calif.  "You only get one shot at a Mars landing, and the pyrotechnic charges we are using are great for reliably providing instantaneous, irreversible actions like deploying a parachute or opening a fuel valve."

Explosive pyrotechnic devices predate the space age by about a thousand years.  Around 750 A.D., people in China began stuffing an early form of gunpowder into bamboo shoots and throwing them into a fire.  At some point, someone interested in taking this new discovery to the next level (probably also from that region), decided aerial explosions would be even cooler, and the "aerial salute" was born.  Fireworks were also part of America’s very first Independence Day in 1777.

Pyrotechnics, or pyromechanical devices, are a natural but highly-engineered extension of these early fireworks. Instead of a rocket’s red glare and bombs bursting in air, the energy from these explosions is contained within a mechanism, where it is used to move, cut, pull or separate something. Controlled explosions are a valuable tool to those who explore beyond Earth’s atmosphere because they are quick and reliable.

"When we need valves to open, or things to move or come apart, we want to be confident they will do so within milliseconds of the time we plan for them to do so," said Rich Webster, a pyromechanical engineer at JPL. "With pyros, no electrical motors need to move. No latches need to be unlatched. We blow things apart — scientifically."

Seventeen minutes before landing, the first 10 of 76 pyros will fire within five milliseconds of each other, releasing the cruise stage that provided the entry capsule (and its cocooned descent vehicle and the Curiosity rover) with power, communications and thermal control support during its 254-day journey to Mars.

"We have essentially three miniature guillotines onboard that, when the pyros fire, cut cabling and metal tubing that run between the cruise stage and the entry capsule," said Luke Dubord, avionics engineer for Mars Science Laboratory at JPL.  "Then a retraction pyro pulls them out of the way. Along with that, we’ve got six pyrotechnic separation nuts, which when fired, will actually accomplish the separation."

One hundred and twenty-five milliseconds later, two more pyros fire, releasing compressed springs that jettison two 165-pounds(75-kilogram) solid tungsten weights. These weights allow the entry capsule to perform history’s first planetary lifting body entry (see  http://mars.jpl.nasa.gov/msl/mission/technology/insituexploration/edl/guidedentry/ ). A dozen minutes and one fiery, lifting-body atmospheric reentry later, another smaller set of tungsten weights is ejected by pyros to re-adjust the lander’s center of mass for the final approach to the surface. A few seconds after that, the largest bang since the spacecraft separated from its Atlas rocket 254 days before is scheduled to occur.

"The Mars Science Lab parachute is the largest used on a planetary mission," said Dubord. "When folded up and in its canister, it’s still as big as a trashcan. We have to get that folded-up chute out of its canister and unfolding in a hurry. The best way to do that is get it quickly away from spacecraft and out into the freestream using a mortar."

The best way to do that, the engineers at JPL decided, was to include a pyrotechnic charge equivalent to a stick of TNT.

"When something like this goes off, it makes a lot of noise" said Dubord. "Of course, at 8.7 miles [14 kilometers] up and a little over Mach 1, over Mars, I doubt anybody will be there to hear it."

While the ejection of the parachute is the biggest pyrotechnic display during the crucial entry, descent and landing, it is certainly not the last. The landing system needs to be released from the backshell that helped protect it during entry. The sky crane’s descent engines need to be pressurized, and the rover itself needs to be released from the sky crane, where it is lowered on tethers toward the surface. All told, there are another 44 controlled explosions that need to happen at exactly the right time and at absolutely no other time for Curiosity to touch down safely at Gale Crater.

"The thing is, a pack of matches won’t help you land on Mars….pyrotechnics will," Webster added.

The Mars Science Laboratory mission is managed by JPL for NASA’s Science Mission Directorate in Washington. Curiosity was designed, developed and assembled at JPL. Caltech manages JPL for NASA.