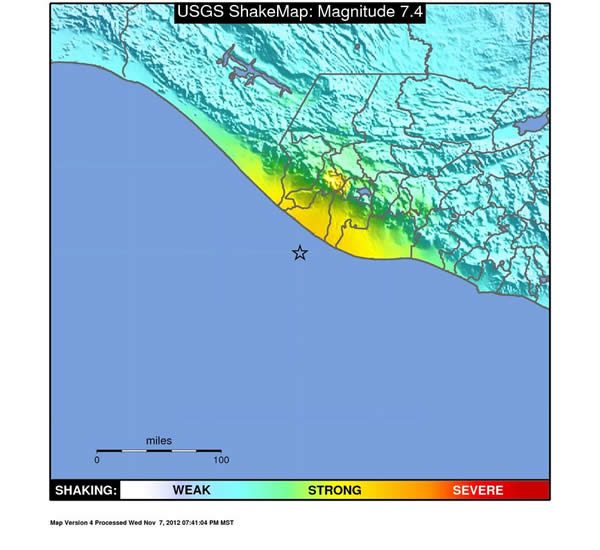 The November 7, 2012 M 7.4 earthquake south of Champerico, Guatemala occurred as a result of thrust faulting on or near the subduction zone interface between the subducting Cocos plate and the overlying Caribbean and North America plates, near their triple junction.  At the latitude of this earthquake, the Cocos plate moves north-northeast with respect to the Caribbean and North America plates at a velocity of approximately 70-80 mm/yr, and subducts beneath Central America at the Middle America Trench.

Over the past 40 years, the region within 250 km of the November 7 earthquake has experienced 50 earthquakes with M 6 or greater; two of these were larger than M 7. The first was a M 7.1 in December of 1983, in approximately the same location as the November 7 event, and resulted in no documented fatalities. The second had a magnitude of M 7.2, and struck a region just over 100 km to the northwest offshore Mexico in September 1993. There was one known fatality associated with the 1993 event. A M6.8 earthquake in October of 1979, 120 km to the east-southeast of the November 7 earthquake, resulted in 7 fatalities in Guatemala.