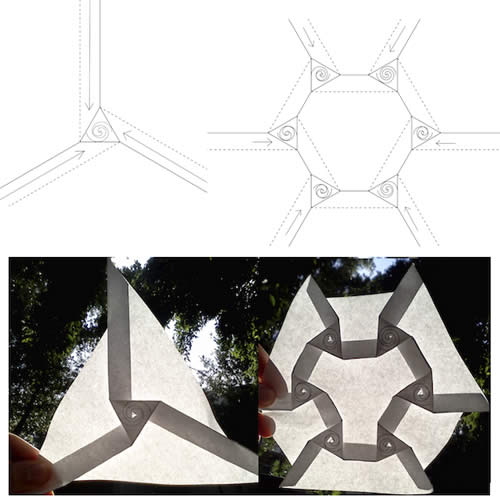 Baltimore, MD-(ENEWSPF- Two Johns Hopkins University research scientists who use the Japanese art of paper folding, known as origami, as a metaphor for understanding the complexity of the cosmos have been named winners of an award through the “New Frontiers in Astronomy & Cosmology International Grant and Essay Writing Competition,” funded by the John Templeton Foundation.

Mark Neyrinck and Miguel Aragón-Calvo, both of the Henry A. Rowland Department of Physics and Astronomy at the Johns Hopkins University’s Krieger School of Arts and Sciences, were chosen from an international competition led by the University of Chicago’s Donald G. York to receive a grant to explore fundamental questions in astronomy and cosmology that engage groundbreaking ideas on the nature of the universe. Both scientists are part of Johns Hopkins’ Institute for Data Intensive Engineering and Science (IDIES), a center led by fellow Johns Hopkins astrophysicist and computer scientist, Alexander Szalay, and aimed at developing new ways of building and analyzing huge data sets.

The researchers will receive their award at a conference October 12 and 13 at Philadelphia’s Franklin Institute.

“It’s fantastic to get recognition and support for these fundamental issues of gravity on large scales,” said Neyrinck, the principal investigator on the grant. “In modern cosmology, sometimes it seems like it’s entirely about adding more digits to parameters. This is essential to do to determine what’s going on, but it’s important to push on the conceptual front, too.  The cosmic web is an area where there’s still much to be understood.”

This definition is related to an origami analogy of the cosmic web: the amount of complexity in a structure like a galaxy or filament of galaxies increases with the amount of “origami paper” that gets folded up to construct the structure.

The team will use this definition for the first all-inclusive quantitative measurement of the complexity, or entropy, in the cosmic web.  In modern theories of gravity, entropy is a subtle concept, but it seems to be of crucial importance. Fully understanding gravitational entropy may provide the key to the mystery of “dark energy,” the accelerated expansion of the universe, the co-discovery of which garnered Johns Hopkins professor Adam Riess a share of last year’s Nobel Prize in Physics.

York, of the University of Chicago, said “through these awards, the program aims to support bold, innovative research with the potential to expand boundaries and catalyze breakthrough discoveries, as well as inspire students to pursue scientific knowledge and become original, forward-looking big question thinkers of tomorrow.”

The awards mark the century celebration of the birth of Sir John Templeton, a philanthropist who regarded cosmology and astronomy as exemplary scientific pursuits that expanded humanity’s vision of the world. The conference has been timed, as well, to the 25th anniversary of the establishment of The Templeton Foundation.

For a complete list of grant winners, see research-grant-program-recipients.html.

For more information about the awards, see www.newfrontiersinastronomy.org

For a more thorough description of Neyrinck and Aragon-Calvo’s work, see: http://skysrv.pha.jhu.edu