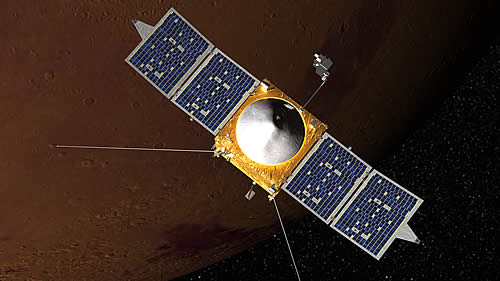 MAVEN, scheduled for launch in late 2013, will be the first mission devoted to understanding the Martian upper atmosphere. The goal of MAVEN is to determine the history of the loss of atmospheric gases to space through time, providing answers about Mars climate evolution. It will accomplish this by measuring the current rate of escape to space and gathering enough information about the relevant processes to allow extrapolation backward in time.

Noting this milestone, Michael Meyer, Lead Scientist for NASA’s Mars Exploration Program at NASA Headquarters said. "It is a real pleasure to see the MAVEN team is doing an exemplary job on this important mission, which was identified as a top priority mission in the 2002 National Research Council Decadal Survey and addresses high-priority goals of two Divisions—Planetary Sciences and Heliophysics."

"Understanding how and why the atmosphere changed through time is an important scientific objective for Mars," said Bruce Jakosky, MAVEN Principal Investigator from the Laboratory for Atmospheric and Space Physics at the University of Colorado (CU/LASP) at Boulder. "MAVEN will make the right measurements to allow us to answer this question. We’re in the middle of the hard work right now—building the instruments and spacecraft—and we’re incredibly excited about the science results we’re going to get from the mission."

From July 11 – 15, 2011, the MAVEN Critical Design Review was held at NASA Goddard Space Flight Center in Greenbelt, Md. An independent review board, comprised of reviewers from NASA and several external organizations, met to validate the system design. Critical Design Reviews are one-time programmatic events that bridge the design and manufacturing stages of a project. A successful review means that the design is validated and will meet its requirements, is backed up with solid analysis and documentation, and has been proven to be safe. MAVEN’s CDR completion grants permission to the mission team to begin manufacturing hardware.

"This team continues to nail every major milestone like clockwork, as laid out three years ago when the mission was proposed," said Dave Mitchell, MAVEN Project Manager at NASA Goddard Space Flight Center in Greenbelt, Md. "CDR success is very important because it validates that the team is ready for fabrication, assembly, and test of all mission elements. It also enables us to stay on plan for launch in November 2013."

MAVEN will carry three instrument suites. The Particles and Fields Package, built by the University of California at Berkeley with support from CU/LASP and NASA Goddard, contains six instruments that will characterize the solar wind and the ionosphere of the planet. The Remote Sensing Package, built by CU/LASP, will determine global characteristics of the upper atmosphere and ionosphere. The Neutral Gas and Ion Mass Spectrometer, provided by NASA Goddard, will measure the composition and isotopes of neutral ions.

MAVEN’s principal investigator is based at the University of Colorado at Boulder’s Laboratory for Atmospheric and Space Physics. The university will provide science operations, build instruments, and lead Education/Public Outreach. Goddard Space Flight Center in Greenbelt, Maryland, will manage the MAVEN mission. Lockheed Martin of Littleton, Colo., will build the spacecraft and perform mission operations. The University of California-Berkeley Space Sciences Laboratory will build instruments for the mission. NASA’s Jet Propulsion Laboratory, Pasadena, Calif., will provide Program management via the Mars Program Office, as well as navigation support, the Deep Space Network, and the Electra telecommunications relay hardware and operations.

For more about MAVEN, refer to: www.nasa.gov/maven