Washington, DC–(ENEWSPF)– August 6, 1012.  The Minnesota Supreme Court reversed a ruling that gave organic farmers clear redress and decided that pesticide drift from one farm to another is not trespass, but instead must, in litigation, be found to be negligence or a nuisance. The ruling, while still giving farmers a legal channel to sue on pesticide drift, creates a higher standard for organic farmers to seek relief if their crops are damaged by pesticide drift. The ruling overturns a decision last summer by the state Court of Appeals that said pesticide drifting from its intended farm onto an adjacent organic farm could be considered a trespassing violation. 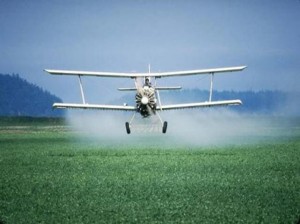 In reversing a 2011 appeals court ruling, the Supreme Court said Minnesota does not recognize trespassing by “particulate matter.” The high court said the earlier appeals court ruling that found otherwise went “beyond our precedent.” The case is that of organic farmers Oluf and Debra Johnson, who sued the Paynesville Farmers Union Cooperative Oil Company in 2009. The Johnsons alleged that the co-op repeatedly sprayed pesticides that drifted onto their fields, preventing them from selling their crops as organic. The Johnsons transitioned their farm to organic in the 1990s to take advantage of the higher prices organic crops and seeds bring. They posted signs noting that the farm was organic, created a buffer between their property and neighboring farms, and asked the co-op to take precautions, according to court records. The ruling states that the Johnsons do not claim there was an invasion by a tangible object, but instead claim the co-op’s actions prevented them from using their land as they wanted. Therefore, the court ruled, “the Johnsons’ claim is one for nuisance, not trespass.” The dissenting opinion stated, “The court’s one-size-fits-all holding that particulate matter can never cause a trespass fails to take into account the differences between these various substances.”

The District Court in Minnesota previously ruled that pesticide drift cannot be trespass, but the Appeals Court disagreed. The Supreme Court, while upholding the dismissal of the trespassing charges, remanded the case to the district court so that the Johnsons’ negligence and nuisance claims can proceed. However, for negligence cases, the burden of proof required makes more difficult to take these cases to trial, thus making it more difficult for organic farmers to be compensated for their losses.

The court also analyzed organic farming regulations and found that organic farmers who experience pesticide drift from a third party, but do not intentionally apply the chemicals themselves, may still be certified as organic if the chemicals are below five percent of levels. Under the federal organic standards authorized by the Organic Foods Production Act (OFPA), produce may not be labeled organic if it is contaminated with pesticide residues, as a result of off-site use, no greater than five percent of the allowable pesticide tolerance levels. Pesticide tolerances are the pesticide residue limits used in the U.S. or by countries importing to the U.S. that are set by the federal government under the Federal Food, Drug and Cosmetic Act (FFDA) and amendments to the act under the Food Quality Protection Act (FQPA). As it is near impossible to be completely free of chemical contaminants, which can be found in the air and in waterways, a very small amount of pesticide contamination can be considered unavoidable and permitted in organic agriculture, based on an inspection and efforts on the farm to reduce contamination.

Similar cases of pesticide drift have made their way to the courts in other states. In 2011, a California’s 6th District Court of Appeal in San Jose upheld Jacobs Farm/Del Cabo’s right to sue the pesticide applicator, Western Farm Service, and let stand the $1 million damage award a jury previously handed Jacobs Farm The ruling made it clear that in California pesticide users can be held liable for pesticide drift. Last month, the District Court in Delta, Colorado, granted a permanent injunction to prohibit a farmer from fogging for mosquitoes within 150 feet of his neighbor’s property or allowing the pesticides to drift, which in this case is considered a form of trespass.

Pesticide drift is not only a problem for organic growers. Pesticide drift has recently been suspected in the tree deaths throughout the East Coast and Mid-West. A 2011 study by the Centers for Disease Control and Prevention’s (CDC) National Institute for Occupational Safety and Health (NIOSH) finds that pesticide drift from conventional farming has poisoned thousands of farmworkers and rural residents in recent years. Pesticides can volatilize into the gaseous state and be transported over long distances fairly rapidly through wind and rain. Documented exposure patterns result from drift cause particular concerns for children and other sensitive population groups. Adverse health effects such as nausea, dizziness, respiratory problems, headaches, rashes, and mental disorientation may appear even when a pesticide is applied according to label directions. For more information on pesticide drift, read Beyond Pesticides’ report, Getting the Drift on Chemical Trespass: Pesticide drift hits homes, schools and other sensitive sites throughout communities.

Similar to the threat of pesticide drift faced by organic farmers, is the threat of genetic drift -typically pollen from a field of a genetically engineered (GE) crop being carried by wind or pollinators like honey bees, which are known to travel six miles or further. While organic food is not currently tested for GE drift contamination the way it is spot checked for pesticides, consumers paying a premium for organic food demand purity. Therefore, the growing threat of genetic contamination is a serious issue facing organic farmers as well.

Support organic agriculture for your family’s health, as well as the health of farmworkers and rural families, wildlife and pollinators, and the greater environment. For more information about the pesticides registered for use on foods we eat every day, see Beyond Pesticides’ Eating with a Conscience guide, and the Organic Food program page.