NASA: New Ways to Measure Magnetism Around the Sun 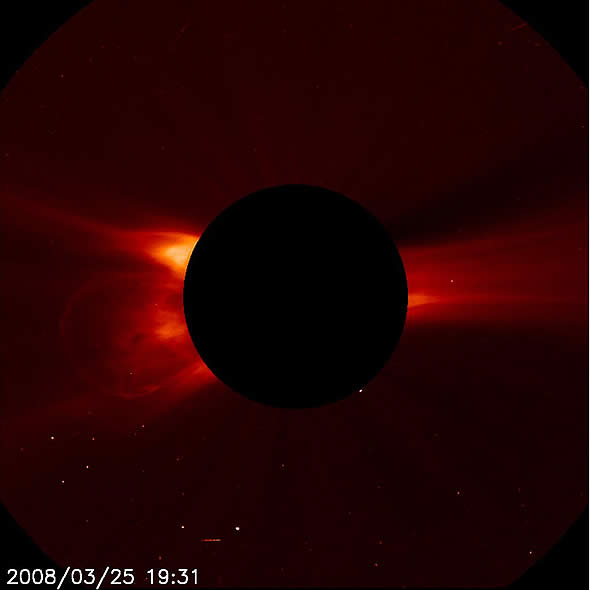 By analyzing the size and shape of the bow shock on this March 25, 2008 coronal mass ejection (the loop extending to the left) scientists have devised a technique to measure magnetic fields near the sun. Credit: SOHO/LASCO (ESA & NASA)

NASA’s Goddard Space Flight Center-(ENEWSPF)- Those who study the sun face an unavoidable hurdle in their research – their observations must be done from afar. Relying on images and data collected from 90 million miles away, however, makes it tough to measure the invisible magnetic fields sweeping around the sun.

Scientists must learn more about these fields because they are crucial to understanding how coronal mass ejections, or CMEs, travel through space — sometimes toward Earth where they can damage satellites. Now NASA researchers have made use of old mathematical techniques and new insights on how CMEs travel to devise a fresh way to measure this magnetic environment in the sun’s upper atmosphere, the corona.

"The magnetic field is the skeleton of the entire heliosphere, guiding how particles and CMEs move toward Earth," says solar physicist Nat Gopalswamy of NASA’s Goddard Space Flight Center in Greenbelt, Md. He says researchers routinely measure the fields near the sun’s surface, but haven’t been able to do as well further out in the sun’s atmosphere. "Before, we’ve only been able to measure it in the upper corona with a technique that required exact conditions. Our new method can be used more consistently."

Indeed, this new method can be used any time there’s a good side view of a CME, Gopalswamy explains in a new paper that will appear in the July 20 issue of the Astrophysical Journal Letters.

The mathematical relationship between how an object moves through gas and the bow shock it creates – that’s the region of compressed and distorted gas that flows around a fast-moving object, much like the shock created by a supersonic jet — has been understood since the 1960s. When an object moves through gas that is electrically charged, known as "plasma," that movement also corresponds to the strength of the magnetic field.

The problem in the solar environment was spotting a CME’s bow shock as it traveled through the upper corona. In that part of the sun’s atmosphere, scientists weren’t finding the signature ring around a CME that signified a bow shock in images closer to the sun. But on March 25, 2008, the sun provided a perfect test case: a CME traveling at three million miles per hour and reported by several NASA spacecraft including the Solar and Heliospheric Observatory (SOHO) and the two Solar TErrestrial RElations Observatory (STEREO) spacecraft. From the perspective of both SOHO and STEREO-A, the CME appeared to be bursting off the horizon, or limb, of the sun. Limb events like this offer the side-view needed to best watch how a CME develops over time.

Gopalswamy realized that the shock could indeed be seen in standard white light images in these pictures, it just didn’t look like what he expected. Given how tenuous the solar atmosphere is, the shocks were much less precise than usual, drifting out raggedly from the main event. "They don’t stay close to the CME," says Gopalswamy. "They escape from the edges of the ejection and fizzle out as the CME slows down." 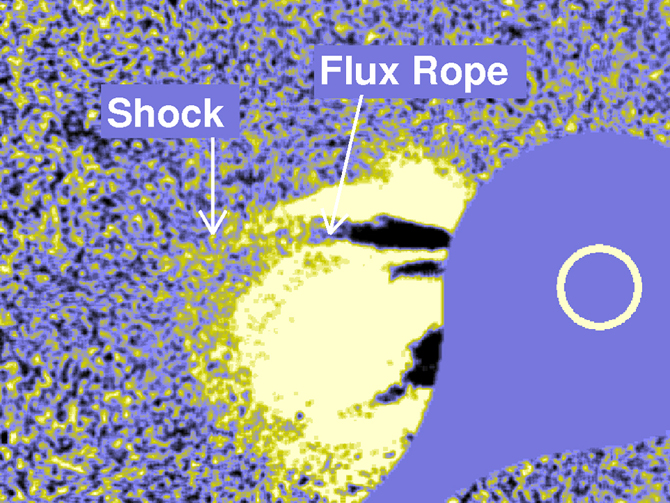 › View larger
The brighter area represents the edge of the coronal mass ejection – a large slinky-like structure known as a flux rope – while the fainter area beyond that represents the bow shock. Measuring the distance between these two can help scientists measure the magnetic field strength in the corona. Credit: Gopalswamy/Astrophysical Journal Letters

For the March 25 event, the team spotted the contours of a diffuse ring around the edges of the CME. From there determining the strength of the magnetic fields was a fairly simple math problem. The distance between the CME and the bow shock, as well as the CME’s radius of curvature, all give information about the medium through which the shock moves – much the way one might analyze the speed and shape of a wave to determine whether it’s moving through water or something thicker like oil.

In this case, the speed of the shock can be used to find what’s known as the "Alfvén speed" of the medium. Alfvén speed governs how fast waves can propagate through plasma the same way sound speed governs how sound travels through differing mediums like water or air. Indeed, much like the sound barrier, Alfvén speed determines how fast something can travel through a magnetized field before creating a shock. Once this speed is known, the strength of the magnetic field itself can be determined.

This mathematical technique had previously been incorporated into other studies where one could spot a more well-defined bow shock and used to do such things as determine the position of Earth’s shock or to better understand the curvature of a CME. "This is a testament to how the different subdisciplines of heliophysics can be integrated," says Joe Gurman, who is the project scientist for SOHO and STEREO. "Here we see a method originally developed to study Earth’s magnetic environment extended first to understand interplanetary CMEs and CMEs very near the Sun, and now to measure the magnetic field in the corona."

To help confirm the method, Gopalswamy and his co-author on the paper, Seiji Yashiro of Goddard and Catholic University, took measurements of the field strength at various distances from the sun. This range agreed with other estimates, adding to the team’s belief that this could be a useful technique for future measurements. Added to other information about the corona that is easier to obtain such as particle density, temperature and magnetic field direction, measuring the magnetic field strength can help round out a picture of the environment around the sun despite collecting data from over 90 million miles away.

"Knowledge of the magnetic field is crucial for all attempts to understand the physics of space weather," says Gurman. "And it’s especially gratifying to see both STEREO and SOHO – the fifteen-year-old workhorse of the Heliophysics observing system – being used together to improve that picture."

This research was supported by NASA’s Living With A Star Program, which provides missions to improve our understanding of how and why the Sun varies, how the Earth and Solar System respond, and how the variability and response affects humanity in Space and on Earth.

Previous article120 Park Forest Youth Help Plan the Future of Their Village
Next articleIllinois & Iowa Delegation Members to General: Any Proposal to Relocate JMTC Would Face Bipartisan Resistance in Congress