Washington, DC–(ENEWSPF)–February 11, 2014.  In the midst of another tough winter for bees across the globe, scientists reveal new research showing that exposure to neonicotinoid pesticides causes a 57% reduction in the amount of pollen bumblebees are able to collect for their colony. The new evidence on these systemic pesticides, “Field realistic doses of pesticide imidacloprid reduce bumblebee pollen foraging efficiency,” published in the journal Ecotoxicology, documents a decline in pollen gathering abilities at extremely low doses that bees are likely to encounter in the field. Researchers found that the effects of neonicotinoid intoxication persist for a least a month after exposure, underscoring the long-term damage these chemicals can cause to bee colonies. 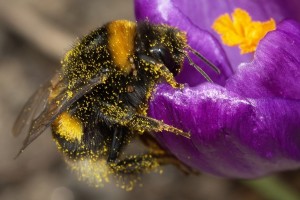 Hannah Feltham, PhD, research student and co-author of the study, remarked, “This work adds another piece to the jigsaw. Even near-infinitesimal doses of these neurotoxins seem to be enough to mess up the ability of bees to gather food. Given the vital importance of bumblebees as pollinators, this is surely a cause for concern.”

After being exposed to “near-infinitesimal” amounts of the neonicotinoid imidacloprid through pollen and sugar water (6 parts per billion and .7 parts per billion, respectively), bumblebees were outfitted with Radio Frequency Identification (RFID) chips to track their movement. To determine the amount of pollen collected, bees were weighed each time they entered and exited their nest. While the amount of time spent collecting pollen remained the same for the control (unexposed) bees, neonicotinoid-treated bees spent longer and longer out in the field collecting less pollen.

Lead author of the research, Dave Goulson, PhD, explains, “Pollen is the only source of protein that bees have, and it is vital for rearing their young. Collecting it is fiddly, slow work for the bees and intoxicated bees become much worse at it. Without much pollen, nests will inevitably struggle.”

This study adds context and causality to research published by Dr. Goulson in the journal Science in 2012, “Neonicotinoid Pesticide Reduces Bumble Bee Colony Growth and Queen Production.” Though the previous research documented observable harm as a result of pesticide exposure, it was unable to account for how this effect happened. With this new research, scientists are showing the exact mechanism through which neonicotinoids reduce bumblebee colony growth and queen production.

The weight of evidence showing harm to pollinators from the use of neonicotinoid pesticides spurred the European Union to enact a two year suspension on the use of these chemicals. Dr. Goulson notes that his new study supports making this ban permanent. In the United States, however, the Environmental Protection Agency has yet to follow suit. In fact, the agency has done the opposite of what is prudent under current science by continuing to register new systemic pesticides, such as cyantraniliprole and sulfoxaflor, that are implicated as highly toxic to bees.

In the absence of government action, Beyond Pesticides is encouraging those concerned about pollinator safety to “Do Something Sweet for Bees” this Valentine’s Day. Hardware retailers in the United Kingdom announced last year that they would no longer sell pesticides linked to declining pollinator populations. We still have some catching up to do in the U.S. on this issue as well, as Home Depot and Lowe’s continue to carry neonicotinoid pesticides and plants poisoned with these chemicals in their stores. A pilot study released last year by Friends of the Earth, Beyond Pesticides, and others found that 7 of 13 samples of garden plants purchased at top retailers in Washington DC, the San Francisco Bay Area, and Minneapolis contained neonicotinoid pesticides.

In light of this new study showing injury to bees from minute levels of exposure to these chemicals, it is imperative that home gardeners have the opportunity to purchase plants that can provide a safe haven for bees, and not impair their ability to provide food for their colony. Take action in your community and deliver a Valentine to Lowe’s and Home Depot this week, and see Beyond Pesticides’ action page for additional ways you can get involved in this week’s National Swarm.

Continue your commitment to helping pollinators by joining us April 11-12 for Beyond Pesticides’ 32nd National Pesticide Forum, “Advancing Sustainable Communities: People, pollinators, and practices,”  in in Portland, OR. The Forum will focus on solutions to the decline of pollinators and other beneficial organisms, strengthening organic agriculture, improving farmworker protection and agricultural justice, and creating healthy buildings, schools and homes. Space is limited so register now.