Washington, DC–(ENEWSPF)–October 7, 2013.  A controversial agriculture bill that would bar counties in Oregon from regulating genetically engineered (GE) crops has passed in the state legislature to the dismay of many organic and environmental groups. Senate Bill 863 also includes an emergency clause, which would allow the bill to go into effect immediately, precluding opponents from referring the bill to voters. 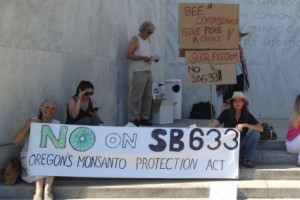 Environmental groups and local food activists are upset that the provision sailed through the state’s legislature. According to the Center for Food Safety (CFS), the Oregon bill was pushed at the behest of out-of-state chemical companies, and is a model bill from the right-wing American Legislative Exchange Council (ALEC), previously introduced in other states. In addition, introduction of this bill is particularly troubling given the recent findings of GE contamination of wheat fields in the state, which has led to the filing of several lawsuits against agrichemical giant, Monsanto. Given that Oregon ranks 5th in the nation for its number of organic farms, with more than 444 certified farms operating on over 156,000 acres as of 2010, according to CFS, GE threats to a thriving organic industry in the state should not be compounded by limiting oversight of this biotechnology.

The fact that S.B. 863 is packaged with other beneficial legislation – more funding for K-12 schools, mental health programs, and changes to tax rules, is reminiscent of the so called “Monsanto Protection Act,” which was quietly slipped into the federal six month continuing resolution (H.R. 933 -Sec. 735) earlier this year. It was recently announced that this language will be removed from the current continuing resolution to fund the government after public outrage. The language of the “Monsanto Protection Act,” similar to S.B. 863, seeks to preempt the federal courts from rectifying or halting the sale and planting of illegal, potentially hazardous GE crops and compel USDA to allow continued planting of the crop. The immediate enactment of S.B. 863 also fends off attempts to refer a repeal measure to the ballot. Like the “Monsanto Protection Act” fiasco, many in Oregon are still questioning how S.B. 863 made it into legislation hat is designed to help improve Oregon’s schools funding, and retiree benefit issues.

“The rights of farmers to protect their crops from unwanted GMO contamination and the rights of consumers to make informed purchases should never have been at issue,” said the Oregon Environment Council, the Oregon League of Conservation Voters and five other groups in a statement. “Trading away environmental protections in unrelated legislative negotiations is an all too common practice that’s bad for not just democracy but also the people of Oregon.”

Environmentalists rallied against the inclusion of the emergency clause, which Republicans pushed to include. House Minority Leader Mike McLane, R-Powell Butte, said the emergency clause was needed to ensure the policy prevented a patchwork of different county policies, including the Lane and Benton efforts. However, most likely in response to the growing outrage over the legislation,Gov. John Kitzhaber is now asking state officials to map locations of GE crops and pledges to introduce legislation in 2015 to address GE agriculture and labeling requirements. In a letter sent to legislators, the governor states that he intends there to be systems that would allow growers to coordinate buffers and exclusion areas. He is also requesting the state department of agriculture to submit an action plan outlining out what can be done on GE regulations under existing rules, and to convene a task force to examine issues surrounding GE agriculture and foods, including preventing contamination of organic agriculture and labeling requirements for GE foods.

“We’re optimistic about the governor’s commitment and stand ready to work with him and the leadership at the Legislature to make sure we’re addressing this issue across the state, protecting farmers and dealing with issues like consumers’ right-to-know,” said Andrea Durbin, executive director of the Oregon Environmental Council.

The Center for Food Safety in a statement noted that it is considering legal options to challenge S.B. 863.

Given the recent GE contamination episodes, it is imperative that existing safeguards not be undermined for the sake of industry interests, and the ability of local communities to safeguard their environment from GE materials be protected.