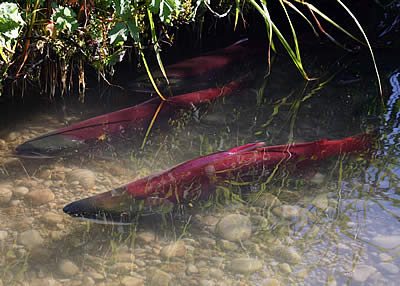 Washington, DC–(ENEWSPF)–February 27, 2013. Last week a U.S. Court of Appeals found that pesticide restrictions to protect endangered salmon and steelhead proposed by the National Marine Fisheries Service (NMFS) in its Biological Opinion (BiOp) were “arbitrary and capricious,” supporting Dow AgroSciences LLC and other pesticide makers’ claims that the restrictions were based on “unsupported assumptions and conclusions.” The BiOp concluded that the pesticides chlorpyrifos, malathion and diazinon, three of the most highly toxic pesticides still in use, pose risks to salmon, steelhead and their habitat.

In collaboration with NMFS, the U.S. Environmental Protection Agency (EPA) is tasked with implementation of any recommended pesticide restrictions to satisfy the mandate under Section 7 of the Endangered Species Act (ESA). However, to date, EPA has not taken any actions to implement any of the proposed measures to protect endangered salmon and steelhead, in part due to challenges from industry. Dow AgroScience LLC, Makhteshim Agan of North America, Inc., and Cheminova, Inc. USA first filed a suit in 2009 (Dow Agrosciences v. National Marine Fisheries ), challenging the NMFS’ 2008 BiOp to restrict chlorpyrifos, malathion and diazinon as being based on numerous unsupported assumptions and conclusions, and faulty analyses. The U.S. District Court upheld NMFS’ BiOp in 2011, finding that the BiOp is rationally supported by the “voluminous facts and studies considered by the [Fisheries Service].” Last week, however, the Fourth Circuit Appeals Court reversed the previous decision, ruling that the BiOp is not the product of reasoned decision making because NMFS failed to explain or support several assumptions critical to its opinion. The court vacated the BiOp and remanded the case back to the district court. The decision also states that NMFS failed to supply an economic reason to ban pesticides from buffer strips of land abutting salmon habitats, even though environmental and fisheries groups argue that BiOps must be based on biology and toxicological impacts, not economic concerns.

The 2008 BiOp assesses the effects of pesticides containing chlorpyrifos, diazinon, or malathion on 28 listed Pacific salmonids, as required under Section 7 of ESA. Citing the goal of the recommendations, “to reduce exposure to ensure that the action is not likely to jeopardize listed species or destroy or adversely modify critical habitat,” the 2008 BiOp concludes that, “EPA’s proposed registration of pesticides containing chlorpyrifos, diazinon, and malathion is likely to jeopardize the continued existence of 27 endangered and threatened Pacific salmonids and is likely to destroy or adversely modify designated critical habitat for 25 threatened and endangered salmonids.” Further, it states, “Measured and predicted concentrations of the three active ingredients in salmonid habitats, particularly in off-channel habitats, are likely to cause adverse effects to listed species including significant reductions in survival, reproduction, migration, and growth,” and that “EPA’s proposed registration of chlorpyrifos, diazinon, and malathion is likely to result in the destruction or adverse modification of critical habitat of these endangered and threatened species because of adverse effects on salmonid prey and water quality in freshwater rearing, spawning, migration, and foraging areas.” Recommendations call for buffers surrounding streams and watersheds and requests that EPA encourage chemical companies to change their pesticide product labels to include buffer requirements, but EPA withheld action until the resolution of the 4th U.S. Circuit Court of Appeals case.

Stephen Mashuda, an attorney for Earthjustice, a San Francisco-based environmental advocacy group that joined the case defending the BiOp, predicted that NMFS will be able to supply the evidence to back up its position that the pesticides pose a threat to salmon and related species. “We’re still confident that the agency’s ultimate conclusions about the pesticides will stand,” Mr. Mashuda said. “These are three of the most toxic pesticides on the planet, to wildlife and to humans.”

NMFS has issued several Biological Opinions which call for several limitations on aerial spraying and ground application of the pesticides near salmon waters, as well as buffer zones around salmon waters and ditches that drain to salmon habitat, among others. EPA was court ordered to consult with NMFS to identify measures needed to protect salmon and steelhead from the pesticides as a result of a 2002 and 2007 lawsuit. As a result of these consultations, EPA in a letter to NMFS, explained how it planned to achieve protection goals through the methods outlined in the BiOps or by alternative methods drafted by the agency. However, pesticide manufacturers willfully ignored and challenged NMFS’ findings and EPA’s implementation of the recommendations. Dow AgroSciences LLC and Cheminova, in stated in correspondence to the EPA, said they were “baffled by the agency’s position,” and that their products do not threaten endangered species. Citing their “solid scientific evidence” that they claim is “far more complete than is reflected in the NMFS Biological Opinion,” they are not prepared to make the registration revisions [to their products].

EPA, under the Federal Insecticide, Fungicide and Rodenticide Act (FIFRA), can force chemical companies to change their labels by cancelling existing labeling and issuing new ones. However, label changes are piecemeal efforts that do not address the larger problem that toxic pesticides pose to human health, wildlife, and environmental integrity. Beyond Pesticides calls for the full protection of endangered species through strong legislation that supports least-toxic chemical use. Throughout the years, chemicals have been poisoning our foods and sickening our children.

In a similar issue, a NMFS draft Biological Opinion found that the issuance of the proposed pesticides general permit by EPA is likely to jeopardize the continued existence of endangered and threatened species and cause the destruction or modification of critical habitat of the species without the implementation of a reasonable and prudent alternative (RPA). NMFS stated that pesticide discharges were resulting in exposures to pesticide pollutants in concentrations, durations or frequencies that cause adverse effects to ESA listed species or designated critical habitat. The controversial pesticide general permit went into effect October 31, 2011 after a months-long unsuccessful battle in Congress to have the water protections revoked.