Washington, DC–(ENEWSPF)–January 31, 2013. A new study finds that a mother’s exposure to pesticides before, during and after pregnancy may increase the risk of infant leukemia diagnosed before the age of two. Researchers in Brazil found that children are twice as likely to develop the rare cancers if their mothers were exposed three months before conception when compared to mothers who reported no exposures. A mother’s exposure at any time to the insecticide permethrin also raised the cancer risk for infants. The results support recommendations for women of reproductive age to minimize their pesticide exposure before and during pregnancy and while breastfeeding, and adds to the growing weight of evidence of the dangers of using synthetic pyrethroid pesticides. 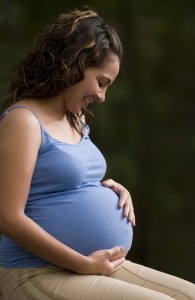 The study, entitled, “In utero pesticide exposure and leukemia in Brazilian children less than 2 years of age,” is published in Environmental Health Perspectives. Researchers asked mothers in Brazil about their pesticide exposure three months before pregnancy, while pregnant and three months after pregnancy when they were nursing. The women reported their home, work and agricultural contact with pesticides (at least once) between 1999 and 2007. Pesticide exposures from mothers of 252 children younger than two years old and diagnosed with either acute lymphoid leukemia (ALL) or acute myeloid leukemia (AML) were compared to exposures from mothers of 423 children of the same age without cancer. Researchers found that children from birth to 11 months old whose mothers were exposed to pesticides during pregnancy are two times more likely to be diagnosed with ALL and five times more likely to be diagnosed with AML, compared to children of mothers who did not report such use. Children 12 to 23 months old whose mothers reported pesticide use during pregnancy are almost twice as likely to be diagnosed with ALL compared to those who did not report such exposure.

The findings support previous studies that indicate maternal pesticide exposure may play a role in childhood leukemia. Prenatal pesticide exposure has been linked to leukemia in older children. Few of these studies have looked at infants and toddlers or considered household pesticide use during the prenatal period. Also, most of the studies focused on occupational exposures.

Permethrin belongs to the chemical class of synthetic pyrethroid pesticides, which are chemically formulated versions of the natural-based pesticide pyrethrum, made from extracts from plants in the chrysanthemum family. Synthetic pyrethroids are one of the most widely used class of insecticides around the home, due in part to the prevalent myth that it is “natural,” and safer than organophosphate insecticides, which have been phased-out of most residential uses. Unfortunately, they have not been widely evaluated for developmental toxicity, despite the fact that they are designed to be more toxic and longer lasting than pyrethrum, and therefore more potent to insects and pose elevated risks to humans. Permethrin is a possible human carcinogen and endocrine disruptor, and exposure can cause immunotoxicity, and reproductive effects.

Ignoring a wealth of independent data that links this class of chemicals to certain cancers, respiratory and reproductive problems, and the onset of insect resistance, the U.S. Environmental Protection Agency (EPA) issued its cumulative risk assessment for the pyrethroid class of insecticides in 2011, concluding that these pesticides “do not pose risk concerns for children or adults.” However, serious issues, such as the carcinogenic and endocrine disrupting potential of several pyrethroids, are not mentioned in EPA’s risk assessment even though a another study published in Environmental Health Perspectives finds that low-dose, short-term exposure to esfenvalerate, a synthetic pyrethroid pesticide, delays the onset of puberty in at doses two times lower than EPA’s stated no observable effect level.

Beyond Pesticides has long documented the increased risk pesticides pose to young children and pregnant mothers. Numerous studies have reported birth defects and developmental problems when fetuses and infants are exposed to pesticides. Synthetic pyrethroids are designed to be more toxic and longer lasting than pyrethrum, and therefore are more potent to insects and pose elevated risks to humans. Exposure to these chemicals can cause headaches, dizziness, nausea, irritation, and skin sensations. Many synthetic pyrethroids have also been linked to disruption of the endocrine system, which can adversely affect reproduction and sexual development, interfere with the immune system, and increase chances of breast cancer. Synthetic pyrethroids have also been linked to respiratory problems such as hypersensitization, and may be triggers for asthma attacks.

Given such compelling research on the risks associated with childhood exposure to pesticides, it is concerning how prevalent and persistent pesticides are in our living environment, and particularly in our homes. A 2009 study from the U.S Environmental Protection Agency (EPA) and U.S Department of Housing and Urban Development (HUD) found the pesticide permethrin in 89% of the 500 homes randomly selected for sampling. Another study conducted by the School of Medicine at The University of Texas San Antonio earlier this year found at least five pesticides in the air of 60% of 29 homes occupied by pregnant Hispanic women. In 2008, researchers at Columbia University’s Center for Children’s Environmental Health (CCCEH) found PBO in 75% of homes occupied by pregnant women in inner-city New York.

To see more scientific research on the effects of pesticides on human health, including birth defects, see our Pesticide-Induced Diseases Database. For more information on what you can do, see our materials for new parents with tips on food choices and safer pest management, specifically designed for new moms and dads.