Scientists Prove Existence Of ‘Magnetic Ropes’ That Cause Solar Storms 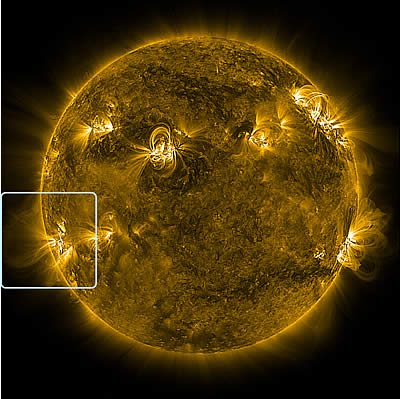 Sun’s image taken at 03:41 UT on March 8, 2011, showing numerous loops of magnetic fields emanating from multiple island-like active regions across the surface of the Sun. The white box encloses the particular active region where the giant magnetic rope was discovered. The image, taken by the Atmospheric Imaging Assembly (AIA) telescope on board SDO at the Extreme Ultraviolet wavelength of 171 angstroms, maps the highly-charge corona gas material at temperature about 1 million degrees Celsius.). More details can be seen in video 1. (Credit: NASA and George Mason University)

Fairfax, VA-(ENEWSPF)- George Mason University scientists discovered recently that a phenomenon called a giant magnetic rope is the cause of solar storms. Confirming the existence of this formation is a key first step in helping to mitigate the adverse effects that solar storm eruptions can have on satellite communications on Earth.

The discovery was made by associate professor Jie Zhang and his graduate student Xin Cheng using images from the NASA Solar Dynamics Observatory (SDO) spacecraft.

Though the magnetic rope was believed to be the cause of these giant eruptions on the Sun, scientists had previously not been able to prove this phenomenon existed because of how quickly the rope moves.

However, through close examination of images taken by the Atmospheric Imaging Assembly (AIA) telescope on board the SDO, Zhang was able to pinpoint an area of the Sun where a magnetic rope was forming. The AIA telescope suite is able to capture images of the Sun every 10 seconds, 24 hours a day. This unprecedented cadence in time helped the discovery.

A solar storm is a violent eruption from the Sun, sending billions of tons of charged material, also called plasma, into space at a speed of more than one million miles per hour. The cloud of plasma carries with it a strong magnetic field. When the magnetized cloud reaches Earth one to three days later, a huge amount of energy is deposited into the magnetosphere of the Earth.


Watch the lower right section of the video to see the solar storm erupt.

Normally the Earth’s magnetosphere shields this harmful solar wind and protects the environment. However, a solar storm has the potential to disrupt the shielding effect and produce severe space weather, which can have harmful effects on a wide array of technological systems, including satellite operation, communication and navigation and electric power grids.

Zhang’s research will help in giving early warning about solar storms and help to minimize the damage done by space weather here on Earth.

“Understanding the eruption process of these storms will definitely help us better predict them,” says Zhang. “We cannot prevent solar storms, just like we cannot prevent earthquakes or volcanoes. But the development of prediction capacity can help mitigate adverse effects. For instance, satellite operators can power-down key systems to prevent the possible damage to the systems.”

It is widely believed that magnetic fields in the Sun play an essential role in storing energy and powering solar storms. However, the exact form that magnetic field lines take prior to the eruption are highly controversial. Most field lines are semicircular loops with their foot-points rooted on the surface of the Sun. They cannot erupt easily, and in fact, they often play the role of preventing the eruption.

AIA images now reveal that, before an eruption, there is a long and low-lying channel running through the entire active region, which heats to a temperature as high as 10 million degrees, and slowly rises. When it reaches a critical point, it starts to erupt quickly. It is a feature distinctly different from the surrounding magnetic field lines. This particular hot channel is now believed to be the magnetic rope that scientists have been looking for.

Zhang is an associate professor in the School of Physics, Astronomy and Computational Sciences and works with the Space Weather Lab at George Mason University. His results were reported at the American Astronomical Society Solar Physics Division Meeting, held in Las Cruces, New Mexico, on June 12-16, 2011.