SAN FRANCISCO–(ENEWSPF)–April 28, 2011. After recently celebrating the defeat of the 152nd proposed coal-fired power plant prevented or abandoned in the past decade, the Sierra Club’s Beyond Coal Campaign announced today that it would shift its focus toward replacing the nation’s existing fleet of dirty coal plants with clean energy sources. A new comprehensive, interactive map of the approximately 500 existing U.S. coal-fired power plants will help guide concerned Americans and public officials as they seize this historic opportunity to stand up for clean energy.

Find the coal plants nearest to you at http://www.sierraclub.org/coal/map/.

While the priority for the Beyond Coal Campaign remains opposing the remaining handful of proposed new coal plants, it is the orderly phase-out of the nearly 500 existing coal-fired power plants that will truly protect public health and help avoid irreparable climate disruption.

“These aging coal plants – some of which date back to the 1920’s – are the largest sources of health-threatening, climate-disrupting pollution and the largest obstacles to a clean energy future,” said Verena Owen, volunteer chair of the Beyond Coal Campaign. “We begin this exciting new phase of the Beyond Coal Campaign on a strong foundation, having recently won important victories in the Tennessee Valley, Colorado and Washington State.” 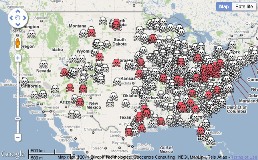 The interactive map announced today allows users to see the dirty coal plants nearest to them, to learn more about the toxic pollution and health threats caused by those plants and to sign up to get involved in the local Sierra Club effort to phase out those coal plants and replace them with clean energy. Just as the Sierra Club used its signature Coal Plant Tracker to empower activists and to monitor progress in the effort to prevent new coal pollution, this new tool will play a key role in the fight to phase out coal plants that already exist.

The map currently focuses on toxic mercury, an alarming health threat from coal-fired power plants. Because toxic mercury from coal plants gets into local waterways, most states have warnings against eating fish caught locally. New protections proposed last month by the Environmental Protection Agency would reduce toxic mercury by more than 90%, and the Sierra Club is mobilizing Americans in support of the proposed new protections. The mapping tool can evolve as needed to highlight the devastation coal causes throughout its life cycle. For instance, when coal pollution causes air quality to reach unhealthy levels in many towns and cities during the summer months, the map can adapt to highlight the worst emitters of soot and smog.

The success of the Sierra Club’s Beyond Coal Campaign throughout the past eight years rests largely on the dedicated activists volunteering on the ground in almost every state.

“Every day, more Americans join the effort to push for cleaner energy options for their area,” added Owen. ”The Sierra Club is proud to present this new roadmap to track their successes.”