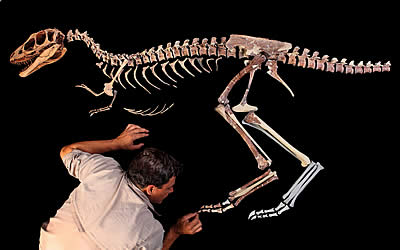 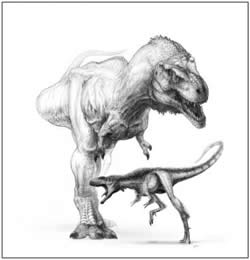 Weighing as little as 1/100th that of its descendant T. rex, 125-million year old Raptorex shows off the distinctive body plan of this most dominant line of predatory dinosaurs. This is based on a fossil skeleton discovered in Inner Mongolia, China. (Drawing: Todd Marshall)

Chicago, IL–(ENEWSPF)– When you think of Tyrannosaurus rex, you probably imagine the unique physical traits that defined the species: a large skull and tiny forearms attached to a tremendous body. But, researchers have just unearthed a much smaller tyrannosaurid in China, no more than three meters tall, that displays all the same features – and predates the T. rex by tens of millions of years. This finding means that such specialized physical features did not evolve as the prehistoric predators grew in size, but instead, they were present for feeding efficiency at all sizes of the dinosaurs during their reign in the Cretaceous Period.

A 9-foot dinosaur from northeastern China had evolved all the hallmark anatomical features of Tyrannosaurus rex at least 125 million years ago. University of Chicago paleontologist Paul Sereno and five co-authors describe the newly discovered dinosaur in the Sept. 17 Science Express, advanced online edition of the journal Science.

Raptorex shows that tyrannosaur design evolved at “punk size,” said Sereno, a National Geographic Explorer-in-Residence, “basically our bodyweight. And that’s pretty staggering, because there’s no other example that I can think of where an animal has been so finely designed at about 100th the size that it would eventually become.”

Paul Sereno and colleagues studied the new, small-bodied fossil, known as Raptorex kriegsteini, and estimated that it was a young adult, about five or six years old when it died. The researchers examined the skull, teeth, nose, spine, shoulders, forearms, pelvis, and hind legs of the new fossil, comparing the features to larger evolutionary versions of tyrannosaurid dinosaurs. They conclude that the specialized feeding features, or “predatory skeletal design,” of R. kriegsteini were simply scaled up with little modification in its descendants, whose body masses eventually grew to 90 times the size of R. kriegsteini. Sereno and his colleagues also use this new fossil to propose and describe three major morphological stages in the evolutionary history of tyrannosaurid dinosaurs.

Raptorex displays all the hallmarks of its famous descendant, Tyrannosaurus rex, including a large head compared to its torso, tiny arms and lanky feet well-suited for running. The Raptorex brain cast also displayed enlarged olfactory bulbs—as in T. rex—indicating a highly developed sense of smell.

“It’s really stolen from tyrannosaurids all the fire of the group,” Sereno said. All that Raptorex left for its descendants is “a suite of detailed features largely related to getting bigger.”

Sereno marvels at the scalability of the tyrannosaur body type, which when sized up 90 million years ago completely dominated the predatory eco-niche in both Asia and North America until the great extinction 65 million years ago at the end of the Cretaceous Period.

“On other continents like Africa, you have as many as three large predators living in the same areas that split among them the job of eating meat,” he said. But in Africa, the allosaurs never went extinct, as they did in North America, possibly presenting an evolutionary opportunity for Raptorex. “We have no evidence that it was a competitive takeover,” said Sereno, “because we have never found large tyrannosaurs and allosaurs together.”

Henry Kriegstein, a private fossil collector, brought the nearly complete Raptorex skeleton to Sereno’s attention after buying it from a vendor. After Sereno and colleagues finish amore detailed study of Raptorex, it will be returned to a museum in Inner Mongolia, the place where the fossil was illicitly excavated.

Funding sources: The Whitten-Newman Foundation and the National Geographic Society.

On TV: Raptorex will appear in the world premiere special BIZARRE DINOS, on the National Geographic Channel at 8 p.m. ET/PT Sundy, Oct. 11.