Washington, DC–(ENEWSPF)–January 23, 2013. A new federal report finds toxic contamination remains widespread in the Chesapeake Bay, with severe impacts in some places, which health and environmental advocates say lends support to their push in Maryland for legislative action on pesticides and other hazardous chemicals. In spite of some cleanup, the health of the Bay has not significantly improved.

The report, “Technical Report on Toxic Contaminants in the Chesapeake Bay and its Watershed: Extent and Severity of Occurrence and Potential Biological Effects” is based on a review of integrated water-quality assessment reports from the jurisdictions in the Bay watershed (Delaware, Maryland, New York, Pennsylvania, Virginia, West Virginia, and Washington, D.C.), Federal and State reports, and articles in scientific journals. It notes that nearly three-fourths of the Bay’s tidal waters are “fully or partially impaired” by toxic chemicals, with people warned to limit fish consumption from certain areas. Contamination is severe in a handful of “hot spots” around the Bay, including Baltimore’s harbor, largely a legacy of past industrial and shipping activity. 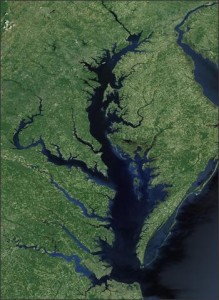 Previous reports have called on federal, state and local government to accelerate research into what threats chemical contamination may pose to the Bay, and to step up efforts to reduce such toxic pollution that is increasingly linked to declines in frogs across the region and intersex fish seen in the Potomac River. According to this latest report, widespread contamination of polychlorinated biphenyls (PCBs), polycyclic aromatic hydrocarbons (PAHs), herbicides (primarily atrazine, simazine, metolachlor, and their degradation products), and mercury persists and indicates the extent of occurrence throughout the Bay watershed. Localized contamination of dioxins/furans, petroleum hydrocarbons, some chlorinated insecticides (aldrin, chlordane, dieldrin, DDT/DDE, heptachlor epoxide, mirex), and some metals (aluminum, chromium, iron, lead, manganese, zinc) are also documented.

As a result of this widespread contamination, compromised fish health has been observed within populations in the Chesapeake Bay watershed, including an increased incidence of infectious disease and parasite infestations contributing to increased mortality in several species of fish; feminization (intersex, plasma vitellogenin) of largemouth and smallmouth bass and other signs of endocrine disruption; reduced reproductive success and recruitment of yellow perch in tributaries in certain highly urbanized drainage basins; and tumors in bottom-dwelling fish. Similarly, organochlorine pesticides have been found in eggs of predatory birds at concentrations associated with embryo lethality.

According to the report, several studies are cited in which PCB concentrations in addled bald eagle eggs may have been high enough to contribute to the failure to hatch. Even though PCBs were banned years ago over health concerns, residues linger and continue to show up in fish tissue. Detectable concentrations of PBDEs have been found in the eggs of predatory birds and in a few locations, eggshell thinning associated with p,p’-DDE is apparent, suggesting reproduction may be impaired.

“Since 2000, new concerns, such as intersex conditions in fish, have arisen,” the report says. “Although the causes are undetermined, there is increasing evidence that contaminant exposures may play a role.”
The report also notes there are other widely dispersed contaminants found around the Bay that pose disputed or unknown threats to wildlife and people, such as the agricultural herbicide atrazine, pharmaceuticals and personal care products, like triclosan and triclocarban.

A group of health and environmental advocates say this new report demonstrates the need for more information about pesticide use in Maryland. They point to its finding that researchers do not know enough about the use of some pesticides to determine the extent and severity of their contamination.

“Our current lack of information about pesticide usage results in dangerous data gaps,” said Robert Lawrence, director of the Johns Hopkins Center for a Livable Future. “Environmental scientists and public health professionals need to know what, when and where pesticides are being used in order to identify which pesticides have adverse impacts on fish, wildlife, the ecosystem, and the health of the public.”

Pesticide reporting is one of Maryland’s environmental community’s top legislative priorities. A bill is planned that would require pesticide applicators and sellers of certain pesticides to report data on sales and use that they are already required to maintain. The bill, ‘The Pesticide Information Act’ would require pesticide use information be compiled and made available to health and environmental officials. The Maryland Pesticide Network ad Maryland Environmental Health Network called for state action to increase data collection and research into the use and potential effects of pesticides and other chemicals citing children and pregnant mothers are especially vulnerable to even tiny doses of pesticides and other chemicals. Beyond Pesticides encourages Maryland residents to sign the petition to pass this bill.

While the report does not address potential effects on human health except in recognizing fish impairments and the status of fish consumption advisories established by jurisdictions in the watershed, it provides considerations for developing reduction goals if established, and identifies research and monitoring that could be conducted to better define the extent and severity of groups of contaminants. The report also focuses on the severity of adverse effects of toxic contaminants on natural resources in the Bay and its watershed. The findings will be used by the regional partnership Chesapeake Bay Program to consider whether to establish new or updated goals for reduction of toxic contaminants.