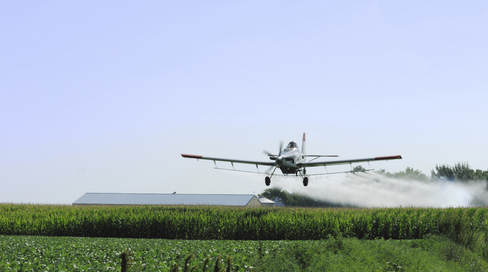 Washington, DC—(ENEWSPF)–December 12, 2014.  Center for Food Safety criticized the final Environmental Impact Statement (EIS) released today by the U.S. Department of Agriculture (USDA) on Monsanto’s dicamba-resistant soybeans and cotton.  The EIS paves the way for introduction of new crops genetically engineered to survive spraying with the herbicide dicamba. If approved, the anticipated widespread adoption of these GE crops would lead to an over 10-fold increase in dicamba use in American agriculture, from under 4 million lbs. at present to more than 40 million lbs. per year.  Commercialization is also contingent on EPA approval of dicamba formulations for use on the new crops, which is presently under consideration.

“Monsanto’s genetically-engineered dicamba-resistant crops are yet another example of how pesticide firms are taking agriculture back to the dark days of heavy, indiscriminate use of hazardous pesticides, seriously endangering human health and the environment,” said Andrew Kimbrell, executive director of Center for Food Safety. “Should both agencies approve this application, Center for Food Safety will pursue all available legal options to halt the introduction of this dangerous crop.”

First approved in the 1967, dicamba is a potent broadleaf herbicide that in epidemiology studies has been linked to increased rates of cancer in farmers and birth defects in their male offspring.  Dicamba is moderately persistent and frequently detected in surface waters.  Farmers are particularly concerned by dicamba’s propensity to drift and damage neighboring crops.  Dicamba drift also threatens flowering plants that provide nectar for pollinators and habitat for other species.  The large increase in dicamba applications that would accompany the crops is expected to dramatically escalate these adverse impacts.

Monsanto has presented dicamba resistant crops as a quick fix to the epidemic of glyphosate-resistant weeds generated by massive use of glyphosate herbicide with the company’s first-generation GE crops, known as Roundup Ready.  However, USDA itself and many scientists predict that the massively increased use of dicamba with these new GE crops will rapidly foster development of still more intractable weeds resistant to both dicamba and glyphosate.

“Monsanto’s dicamba-resistant crops are the latest fruits of a pesticide industry strategy to increase sales of their toxic herbicides,” said Bill Freese, Center for Food Safety science policy analyst.  “Genetic engineering is making American agriculture more chemical-dependent and less sustainable than ever before.”

Freese notes that USDA’s EIS follows hard on the heels of its September 2014 approval of GE 2,4-D-resistant corn and soybeans from Dow Chemical Company, and approvals of similar herbicide-resistant crops developed by other pesticide companies.