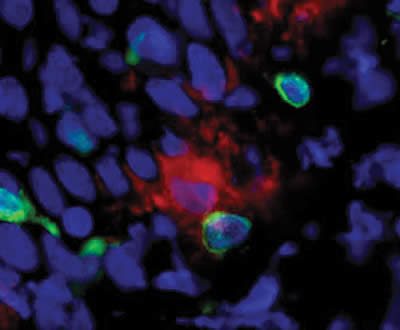 This image shows human regulatory T cells (green) interacting with immune antigen presenting cells (red) of human skin transplants performed in the humanized mouse, allowing the in vivo study of the biology and function of Treg therapy in preparation for clinical use. [Image courtesy of Dr. Pervinder Sagoo]

Although these drugs work pretty well in the short term, they are unable to protect the patient from long-term rejection five or 10 years down the road. And because these drugs also suppress the healthy part of the immune system, they can lead to infection and other undesirable side effects. The body doesn’t normally make enough regulatory T cells to fend off transplant rejection, but by producing massive amounts of regulatory T cells in the lab and putting them back into patients, researchers hope to keep the immune system in check after transplantation.

Pervinder Sagoo and colleagues have figured out a way to use regulatory T cells to suppress only those immune cells responsible for attacking skin transplants. By taking cells from healthy mice and exposing them to cells from transplanted tissue in the lab, the team discovered markers that allowed them to pluck out “donor specific” T cells. The researchers next produced large amounts of these T cells in the lab and put them into mice with human transplanted skin grafts. The donor specific cells blocked only the type of immune response that causes transplant rejection.

This research appears in the 18 May 2011 issue of Science Translational Medicine.

Science is published by AAAS, the non-profit science society.

Previous articleGrow Up In Park Forest? Facebook Has Just The Group for You
Next articleResearchers Identify DNA Region Linked To Depression