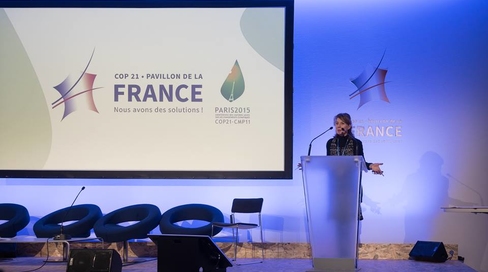 Capping off unprecedented interest in this essential, but typically ignored, resource, this special day is spurred by International Year of Soils, and also marks the midway point of the Nov. 29-Dec. 12 Paris hosted United Nations Framework Convention on Climate Change (UNFCCC). CFS experts are in Paris at the UNFCCC, drawing attention to the power of soil carbon sequestration through regenerative agricultural practices.

“Soil is so much more powerful than most of us realize,” says Diana Donlon, food and climate director at CFS. “Through regenerative farming practices, we have the ability to pull carbon out of the atmosphere, where it is wreaking havoc, and store it in the soil, where it is greatly lacking and where it has multiple benefits for food, water and climate security.”

“We have a huge potential carbon sink right beneath our feet and we’re not taking advantage of it, yet,” adds Debbie Barker, CFS international programs director. “We’re in Paris right now to ensure that the potential of soil and regenerative agriculture as a solution to our climate crisis is fully recognized by the world’s policy makers.”

Emerging soil research and field tests indicate that restoring global soil health can significantly decrease CO2 levels while simultaneously pulling carbon out of the atmosphere and putting it back into the ground where it belongs and where it can do us a world of good.  Essentially, carbon-rich soil allows photosynthesis to do its job by drawing CO2 into the plant. The plant then sends as much as 40 percent of the carbon it captures in its leaves down to its roots, where it the plant trades the carbon with micro-organisms living in the soil in exchange for minerals.  Carbon-based organic matter helps give soil its structure and nutrients, its ability to retain water, and its fertility.  But years of overuse of chemicals, heavy tillage, and leaving soils bare robs the soil of the carbon that is necessary for the full benefits of photosynthesis to be realized.

Globally, soil has lost 50-70 percent of its original carbon content. When soil organic matter is disturbed, carbon molecules escape and combine with oxygen atoms to create CO2. By some estimates, at least 30 percent of global greenhouse gasses can be attributed to agricultural practices—this percentage includes direct and indirect impacts such as clearing carbon-rich peat forests to plant monocultures like palm oil plantations.

Rebuilding soil organic matter on a global scale is essential for food, water, and climate security. Institutions such as the Intergovernmental Panel on Climate Change (IPCC) project that, under current global warming scenarios, median crop yields will decline by approximately 2 percent per decade through 2100 when compared to a baseline without climate change. At the same time, the world’s population is projected to exceed 9 billion people by 2050.  Quite simply, if we don’t start returning carbon to our soil, it will be impossible to ensure an adequate global food supply.

We have a global soil carbon deficit that can be addressed immediately by transferring atmospheric CO2 into stable soil carbon. We can accomplish this by adopting regenerative, organic agriculture practices including: polyculture, cover cropping, agroforestry, nutrient recycling, crop rotation, and organic soil amendments like compost.

It’s time for governments to set policies and incentives for restoring carbon and other nutrients to the soil using natural processes to better ensure a more secure food, water, and climate future.