Washington, D.C.–(ENEWSPF)– On January 13, Fox News’ three top-rated programs for 2009 — The O’Reilly Factor, Hannity, and Glenn Beck — devoted a combined total of less than 7 minutes of coverage to the earthquake in Haiti, instead choosing to air such things as Beck’s hour-long interview with Sarah Palin, Bill O’Reilly’s discussion of Comedy Central host Jon Stewart, and Sean Hannity’s advocacy for Massachusetts candidate Scott Brown’s Senate campaign. By contrast, the content of MSNBC’s three top-rated shows underscored the significance of the Haiti disaster; Countdown, The Rachel Maddow Show, and Hardball devoted a total of more than two hours to the earthquake.

The O’Reilly Factor, Hannity, and Glenn Beck, Fox News’ three top-rated programs for 2009, combined to devote a total of 6 minutes, 41 seconds of coverage to the earthquake in Haiti. Among the things they chose to air instead were Beck’s interview with Palin — to which he devoted nearly his entire show — Hannity’s continued advocacy for Brown; and O’Reilly’s discussion of Stewart. Countdown, The Rachel Maddow Show, and Hardball, MSNBC’s three top-rated shows, devoted 2 hours, 2 minutes and 33 seconds to the earthquake — more than 18 times the coverage devoted by Fox News’ top three shows. Other Fox News shows — such as Special Report with Bret Baier and The Fox Report with Shepard Smith — did devote extensive coverage to the earthquake. 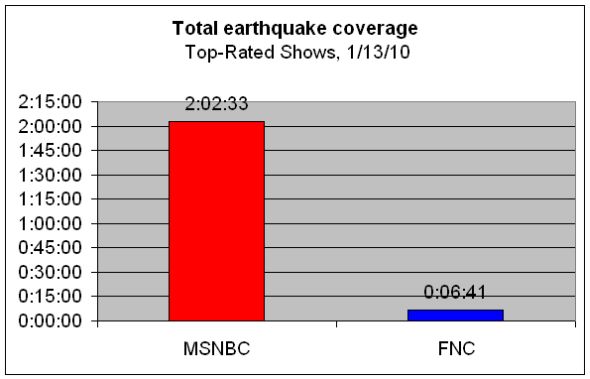 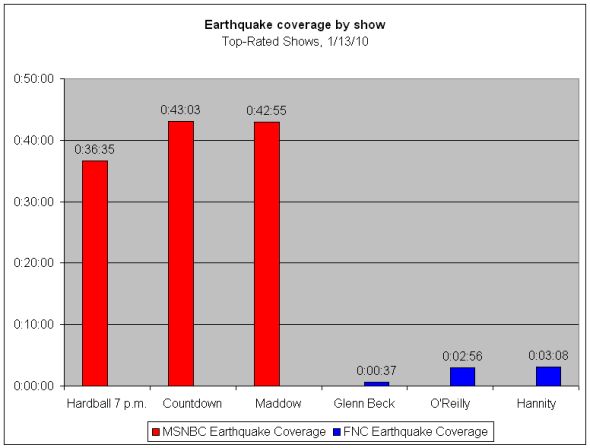 According to a Media Matters review, O’Reilly, Hannity, and Beck devoted only 6 minutes and 41 seconds of coverage to the earthquake on their January 13 editions.

A Media Matters review finds that MSNBC aired 2 hours, 2 minutes and 33 seconds of earthquake coverage on the January 13 editions of Hardball (7 p.m.), Countdown with Keith Olbermann, and The Rachel Maddow Show.

[All times in charts are Eastern time.]

Drew Sandquist contributed to this item.