When people on methadone maintenance treatment (MMT) are incarcerated in the United States, they are almost always forced off of the addiction-controlling medicine. In a randomized trial led by researchers at Brown University and The Miriam Hospital, inmates allowed to stay on MMT while in jail proved much more likely to seek treatment after release than those whose treatment was interrupted. 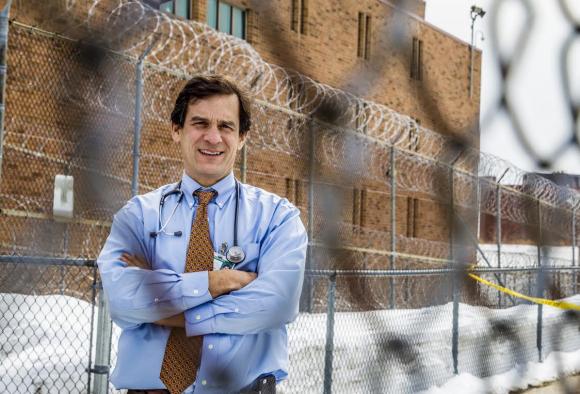 Dr. Josiah Rich “[Methadone is] the only medication that is summarily stopped upon incarceration. This study questioned that policy to find out what happens.” Photo: Mike Cohea/Brown University

PROVIDENCE, R.I. [Brown University]–(ENEWSPF)–May 28, 2015 — New trial results published in The Lancet show that inmates forced off of methadone maintenance treatment upon incarceration — a widespread policy in U.S. prisons and jails — were significantly less likely to return to the effective addiction-controlling remedy after they were released than those who, because of the study, were allowed to remain in treatment.

In the United States nearly 90 percent of the people undergoing methadone maintenance treatment (MMT) for opioid addiction will be cut off from the medicine if they are imprisoned. But according to the Centers for Disease Control and Prevention “the median death rate of opiate-dependent individuals in MMT is 30 percent of the rate of those not in MMT.” The treatment not only saves lives but also reduces the drug-seeking behaviors that lead to crime and the risk behaviors that lead to the spread of diseases such as HIV or hepatitis.

Public health experts therefore have worried that interrupting treatment during incarceration might make people suffering the lifelong battle against addiction more vulnerable after they return to the community. People who have undergone withdrawal from heroin lose their tolerance, for example, but if they resume using they often take the same amount as before. That leads to deadly overdoses.

The new study is the first randomized controlled trial to test whether allowing people to continue MMT upon incarceration increases their likelihood of seeking treatment when they return to the community. The results show that it does. The implication of the finding is that the policy of interrupting MMT for people with addiction reduces their inclination to resume it.

“What we are doing with methadone in our correctional system is we are systematically taking people off it,” said study lead author Dr. Josiah Rich, professor of medicine and epidemiology at Brown University and director of the Center for Prisoner Health and Human Rights at The Miriam Hospital. “It’s the only medication that is summarily stopped upon incarceration. This study questioned that policy to find out what happens.”

A trial behind bars

Rich and his co-authors conducted the trial with 223 people incarcerated for six months or less in the Rhode Island Department of Corrections between June 2011 and April 2013. They randomly divided the inmates into two groups: 114 would gain the opportunity to continue methadone while locked up, and 109 would undergo the same phased withdrawal experienced by all Rhode Island prisoners (in many other U.S. jurisdictions prisoners are cut off immediately).

Upon release, all people in the study were offered financial and logistical assistance to obtain MMT.

The main measure of the study was whether the study subjects attended an MMT clinic within a month after release. The researchers found that more than 97 percent (111 of 114) of the people offered the chance to continue MMT while incarcerated came to a clinic after release, while only 71 percent (77 of 109) of prisoners in the phased withdrawal group did so. Statistical analysis showed that people allowed to continue while incarcerated were twice as likely as the others to engage in MMT after release.

But the study also suggests the difference may really be greater.

Because 45 inmates in the phased withdrawal group ended up being released before the medication had been completely phased out, many of them were still on some dose of the medicine upon release. When Rich and his co-authors compared the outcome for those who were on MMT at release with those who were fully withdrawn, they found that every inmate still on MMT at release continued with treatment in the community while only 48 percent of those off of MMT resumed it. Subsequent statistical analysis showed that people on MMT at release were more than six times as likely as those off MMT to seek treatment after release.

A secondary finding of the study was that continuing MMT in prison was also more cost-effective than cutting it off because higher medical costs, such as emergency room visits, accrued after release for the people withdrawn from treatment than for the ones who stayed on it.

Follow-up at one month after release also showed that people in the group withdrawn from MMT while incarcerated were more likely to self-report returning to opioid use (18 percent did so) than those who stayed on MMT (8 percent).

Rich said the study results have already had an impact in Rhode Island, where prison officials recently decided to lengthen the period of time before phasing out MMT from one week after incarceration to six weeks.

Some public health experts are calling for more.

“[The study] provides another example of how the demands of public security can unwittingly undermine public health,” wrote M-J Milloy of St. Paul’s Hospital in Vancouver and Dr. Evan Wood of the University of British Columbia in an accompanying editorial in The Lancet. “To not only improve the health of those dependent on opioids but also honor the international legal obligation for equivalence of correctional and community-based healthcare, correctional systems in the United States and other jurisdictions should move to provide in-prison evidence-based treatment for opioid dependence.”

Rich agreed that the criminal justice practice of cutting people off from MMT runs counter to the public health goal of fighting addiction. In previous work he has shown that many people avoid ever engaging in MMT because they worry that they will be cut off from it if they are arrested. Cold-turkey withdrawal from heroin is intensely horrible for about a week, Rich said, but withdrawal from methadone can mean months of discomfort including lost sleep. Many people see heroin withdrawal as the preferable way to suffer because it is over more quickly.

Offering MMT in prison rather than ending it might result in more people being in treatment not only during and after incarceration, but also before, Rich said. That, in turn, might reduce the criminal activity that results in incarceration.

“For most of these people, the very reason they are caught up in the criminal justice system is related to their addiction to begin with,” Rich said.