PENNSYLVANIA–(ENEWSPF)–June 26, 2012.  Five years after release of their searing indictment of the failings of the U.S. healthcare system, filmmaker Michael Moore and the real-life stars of SiCKO, will hold a reunion Saturday night in Philadelphia. The event is at 7 p.m. at the Plays and Players Theater, 1714 Delancey Street.

Ironically, the gathering will be one of the first major national events following the expected Supreme Court decision on the Affordable Care Act – and it will serve as a reminder that no matter how the court rules, the national healthcare crisis chronicled in SiCKO is far from over.

Representatives of National Nurses United, the nation’s largest union and professional association of registered nurses, will also speak at the event.  When SiCKO was released in 2007, nurses from the organizations that would later come together to form NNU toured the nation with Moore and several of the SiCKO stars to talk about the need to repair our broken healthcare system once and for all.

The solution, say nurses, is expanding Medicare to cover everyone – an approach that may be even more in focus if the Supreme Court overturns the Affordable Care Act. NNU is currently sponsoring health screenings and town hall meetings across California at which people have been describing ongoing battles to get needed care and what next after the court ruling – including the option of  how Medicare for all can assure guaranteed healthcare for all.

Two SiCKO stars, 9/11 responder Reggie Cervantes and Donna Smith, who will both be in Philadelphia, have spoken out in the California town halls. See them today at this link: http://www.youtube.com/watch?v=Yvuqrr6ggi8 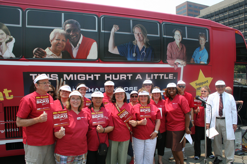 The 2007 RN tour with SiCKO, at stops in Philadelphia, left, and with Moore in New York.

In the reunion event, Moore will be on stage with Smith and Cervantes. Also there will be other stars of the film, including another 9/11 responder, Billy Maher; two SiCKO subjects who lost loved ones to the broken system, Dawnelle Keys and Julie Pierce; Lee Einer, who was SiCKO’s own health insurance industry whistleblower; Adrian Campbell Montgomery, who slipped over the border to Canada to get care for herself and her young daughter; and Smith’s husband Larry, who with his wife lost everything they had to healthcare expenses though their family had health insurance.

Others speaking at the event will include Patty Eakin, RN, of the Pennsylvania Association of Staff Nurses and Allied Professionals (PASNAP/NNU), and NNU Policy Director Michael Lighty, and Pennsylvania healthcare activists, including Philadelphia- based Healthcare-NOW.