Findings give insight into designing safe and effective cannabinoid medications. 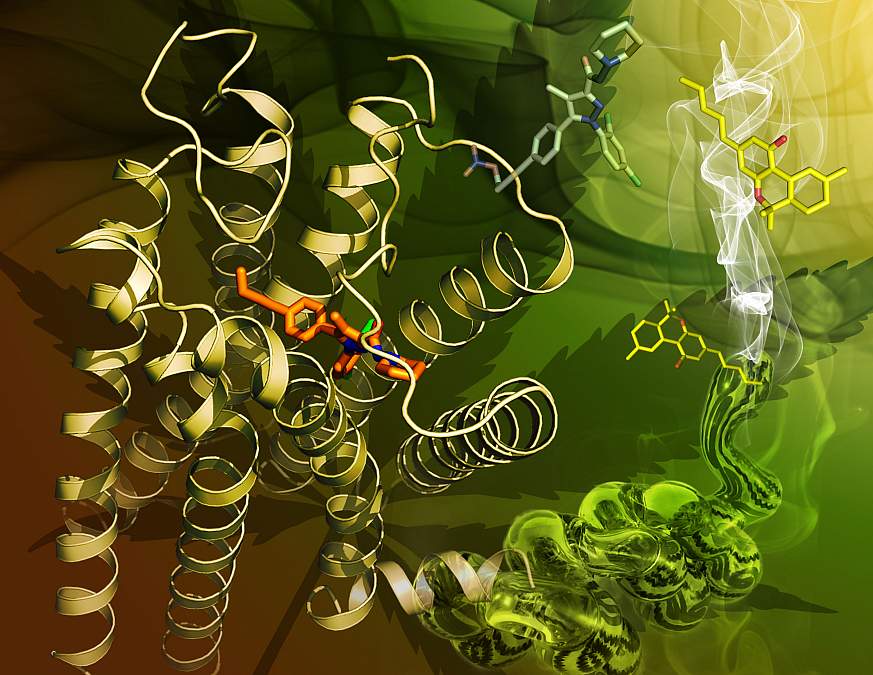 The molecular structure of CB1 is shown as a yellow ribbon with the bound stabilizing antagonist AM6538 as orange sticks. The active ingredient in marijuana, THC, is show as yellow sticks.Yekaterina Kadyshevskaya, The Stevens Laboratory, University of Southern California

Bethesda, Maryland–(ENEWSPF)–October 21, 2016.  New research is providing a more detailed view into the structure of the human cannabinoid (CB1) receptor. These findings provide key insights into how natural and synthetic cannabinoids including tetrahydrocannabinol (THC)—a primary chemical in marijuana—bind at the CB1 receptor to produce their effects. The research was funded by the National Institute on Drug Abuse (NIDA), part of the National Institutes of Health.

There is considerable interest in the possible therapeutic uses of marijuana and its constituent cannabinoid compounds. Molecules that target CB1 receptors may have promise in treating a variety of conditions such as pain, inflammation, obesity, nerve cell diseases, and substance use disorders. However, some synthetic cannabinoids such as K2 or Spice can produce severe and even deadly reactions, whereas other cannabinoids produce less serious side effects.

Researchers used a specific chemical, AM6538, to inactivate and crystallize the CB1 receptor. They then computed the three-dimensional structure of the CB1-AM6538 complex through crystallography, which determines molecular shape by measuring the angles and intensities of x-rays that are bounced off a crystal structure. Based upon prior evidence showing how specific cannabinoids attach to different chemical configurations, researchers were able to predict how these cannabinoids would fit into the three-dimensional CB1 model. The model was also used to calculate how long each cannabinoid bound to the CB1 receptor, thereby providing clues into mechanisms whereby some chemicals produce longer-lasting effects.

“We found that the CB1 receptor consists of multiple sub-pockets and channels,” said Alexandros Makriyannis, Ph.D., director of the Center for Drug Discovery, Northeastern University in Boston, and a co-author on the paper. “This complex structure will allow chemists to design diverse compounds that specifically target portions of the receptor to produce desired effects.”

To learn more about NIH-supported research on marijuana and cannabinoids, go to: www.drugabuse.gov/drugs-abuse/marijuana/nih-research-marijuana-cannabinoids.

About the National Institute on Drug Abuse (NIDA): The National Institute on Drug Abuse (NIDA) is a component of the National Institutes of Health, U.S. Department of Health and Human Services. NIDA supports most of the world’s research on the health aspects of drug use and addiction. The Institute carries out a large variety of programs to inform policy, improve practice, and advance addiction science. Fact sheets on the health effects of drugs and information on NIDA research and other activities can be found at www.drugabuse.gov, which is now compatible with your smartphone, iPad or tablet. To order publications in English or Spanish, call NIDA’s DrugPubs research dissemination center at 1-877-NIDA-NIH or 240-6450228 (TDD) or email requests to [email protected] (link sends e-mail). Online ordering is available at drugpubs.drugabuse.gov. NIDA’s media guide can be found at www.drugabuse.gov/publications/media-guide/dear-journalist, and its easy-to-read website can be found at www.easyread.drugabuse.gov. You can follow NIDA on Twitter (link is external) and Facebook (link is external).