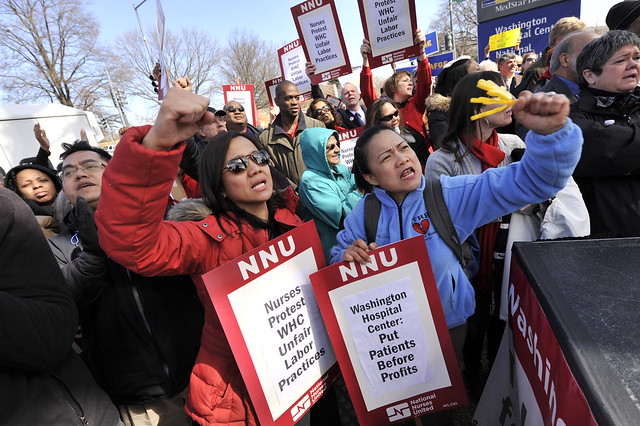 The National Labor Relations Board issued the formal complaint last Friday and will hold a hearing before an administrative law judge in July.

Washington Hospital Center RNs and their union, National Nurses United, filed unfair labor practice charges with the NLRB over the hospital’s failure to bargain in good faith that led to the board’s complaint.

The complaint was prompted by the refusal of hospital management to provide the nurses with copies of a 2012 safety survey by the federal Agency for Healthcare Research and Quality, a division of the U.S. Department of Health and Human Services. AHRQ’s Safety Survey is a yearly survey that is administered to all hospital employees and gages employee perception of patient safety practices in the hospital.

Nurses say the hospital’s decision to withhold vital health and safety information from the RNs is just further indication of the need for district-wide action to improve patient safety.

The Council of the District of Columbia is considering patient safety legislation, the Patient Protection Act,  that would set specific limits on the number of patients for whom RNs can safely care in the form of minimum nurse to patient ratios for all District of Columbia hospitals.

RNs call Washington Hospital Center’s action further evidence of the patient care crisis in the District of Columbia as hospital corporations would prefer to engage in a wholesale campaign to conceal the reality in the District’s hospitals rather than work with their bedside nurses to improve patient safety.

“Unfortunately, the hospital corporations do not want to even discuss needed patient safety measures like adequate staffing with bedside nurses and this complaint from the NLRB is further proof.  That is why we are demanding the Council of the District of Columbia take swift action to pass the Patient Protection Act of 2013 and that Mayor Gray sign the bill into law,” Marlowe said.

The Health Committee of the District of Columbia will conduct a Public Hearing on May 14th at 11 am in Room 500 of the John A. Wilson Building.

A trial on the NLRB complaint is scheduled to begin on July 15th at 10am at the NLRB offices in Washington.