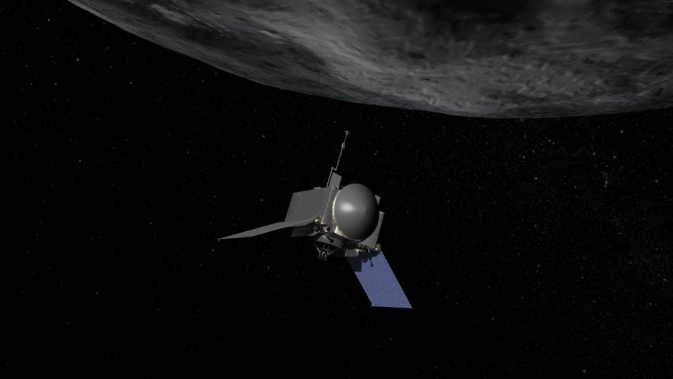 This is an artist’s concept of NASA’s OSIRIS-REx spacecraft preparing to take a sample from asteroid Bennu.

Washington, DC–(ENEWSPF)–April 20, 2014.  NASA’s team that will conduct the first U.S. mission to collect samples from an asteroid has been given the go-ahead to begin building the spacecraft, flight instruments and ground system, and launch support facilities.

“This is the final step for a NASA mission to go from paper to product,” said Gordon Johnston, OSIRIS-REx program executive at NASA Headquarters, Washington, DC. “This confirms that the final design is ready to start the build-up towards launch.”

OSIRIS-REx is scheduled to launch in the fall of 2016, rendezvous with the asteroid Bennu in 2018 and return a sample of it to Earth in 2023. The spacecraft carries five instruments that will remotely evaluate the surface of Bennu. After more than a year of asteroid reconnaissance, the spacecraft will collect samples of at least 2 ounces (60 grams) and return them to Earth for scientists to study.

“Successfully passing mission CDR is a major accomplishment, but the hard part is still in front of us — building, integrating and testing the flight system in support of a tight planetary launch window,” said Mike Donnelly, OSIRIS-REx project manager at NASA’s Goddard Space Flight Center in Greenbelt, Md.

Key mission objectives focus on finding answers to basic questions about the composition of the very early solar system and the source of organic materials and water that made life possible on Earth. The mission will also aid NASA’s asteroid initiative and support the agency’s efforts to understand the population of potentially hazardous near-Earth objects and characterize those suitable for future asteroid exploration missions. The initiative brings together the best of NASA’s science, technology and human exploration efforts to achieve President Obama’s goal of sending humans to an asteroid by 2025.

“The OSIRIS-REx team has consistently demonstrated its ability to present a comprehensive mission design that meets all requirements within the resources provided by NASA,” said Dante Lauretta, principal investigator from the University of Arizona, Tucson. “Mission CDR was no exception. This is a great team. I know we will build a flight and ground system that is up to the challenges of this ambitious mission.”

In January, NASA invited people around the world to submit their names to be etched on a microchip aboard the spacecraft. After submitting their name, participants are able to download and print a certificate documenting their participation in the OSIRIS-REx mission. The campaign is open until September 30, 2014.

For more information about the OSIRIS-REx mission, visit: http://www.nasa.gov/osiris-rex and http://asteroidmission.org

To participate in “Messages to Bennu,” go to: http://planetary.org/bennu