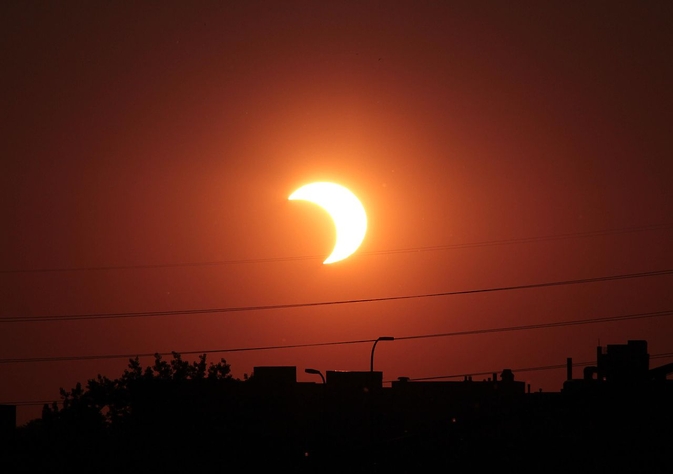 A partial solar eclipse occurs when the moon obscures only part of the sun from Earth’s view.

Washington, DC–(ENEWSPF)–October 23, 2014.  During the late afternoon of Oct. 23, 2014, a partial solar eclipse will be visible from much of North America before sundown.  Partial eclipses occur when the moon blocks part of the sun from view. Find out when it happens in your area with this list of eclipse times in major U.S. cities.

Throughout history, total eclipses, in which the entire sun is blocked from view, have offered scientists the chance to see the faint light of the sun’s atmosphere called the corona, without its being overwhelmed by the sun itself. Total eclipses provide views of that atmosphere, which we otherwise can only get with specialized telescopes – both in space and on the ground — that block out the bright light of the sun.  As a partial eclipse, the Oct. 23 eclipse is of less scientific interest, but it still makes for a great view!

The large shadow coming in from the right shows sundown falling across North America. The lighter shadow moving in from the left shows where a partial solar eclipse will be visible in North America before sundown on Oct. 23, 2014. The time shown is Universal Time, four hours later than EDT. Image Credit: NASA/Sinclair

However, it is never safe to look at the sun with the naked eye.  Even during a partial eclipse, when only a very small part of the sun is visible, viewing it without eye protection risks permanent eye damage or blindness. Listed below are a few ways of safely watching the eclipse.  No matter which recommended technique you choose, do not stare continuously at the sun. Take breaks and give your eyes a rest.  And, remember, don’t use regular sunglasses — they don’t offer your eyes sufficient protection.

1) Projection: The safest and most inexpensive way to watch a partial solar eclipse is by projection. Place a pinhole or small opening in a card, and hold it between the sun and a screen – giant sheet of white paper works – a few feet away. An image of the sun will be seen on the screen. Projected images of the sun’s crescent during an eclipse may even be seen on the ground in the small openings created by interlacing fingers, or in the dappled sunlight beneath a leafy tree. You can also use binoculars to project a magnified image of the sun on a white card. However, you must never look through the binoculars at the sun.

2) Filters: The sun can be viewed directly only when using filters specifically designed for this purpose. Such filters usually have a thin layer of aluminum, chromium or silver deposited on their surfaces. One of the most widely available filters for safe eclipse viewing is a #14 (or darker) welder’s glass. A welding glass that permits you to see the landscape is not safe. Aluminized mylar manufactured specifically for solar observation can also be used. Mylar can easily be cut with scissors and adapted to any kind of box or viewing device. Only use filters that you know have been approved for solar viewing.

3) Telescopes with solar filters: There are sun-specific telescopes available for sale — or perhaps through a local astronomy club — that are also safe for viewing a partial eclipse.

For more on eclipses: http://go.nasa.gov/1sMHZ84

For more on safe viewing of eclipses: http://go.nasa.gov/1sMHwCQ