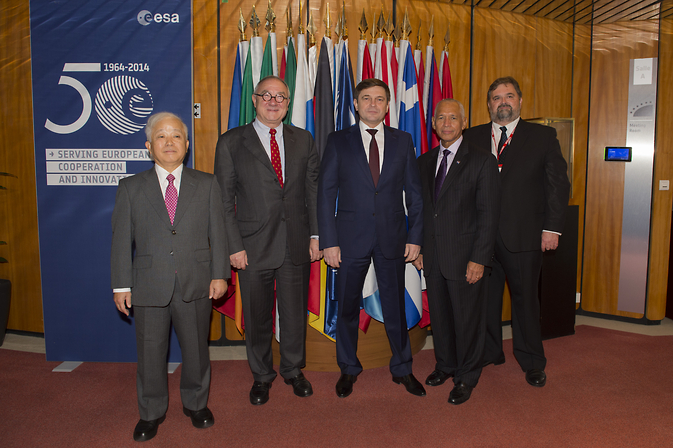 FRANCE–(ENEWSPF)–November 4, 2014.  The heads of the International Space Station (ISS) agencies from Canada, Europe, Japan, Russia and the United States met in Paris, France, on Nov. 4, 2014. The following is a joint statement issued by the leaders:

Recognizing the full mission breadth of the ISS from research that benefits all of humanity, to technology development, to expanding commercial use of low Earth orbit, to enhancing international cooperation and understanding, the agency heads reaffirmed their support for continued ISS operations.

The heads discussed the many ways that research on ISS is benefitting people on Earth, from biomedical breakthroughs to new materials and technologies.  The international partnership is increasing scientific output of the space station through collaboration to meet the needs of the expanding user community and serve as a foundation for future exploration endeavors.

The ISS partner agencies are working through their respective governmental procedures for continued ISS utilization through at least 2020 and noted the U.S. commitment to extend ISS utilization to at least 2024. They also noted the ongoing work by other governments for a similar extension.  In reviewing the strong commitment that enabled 14 years of continuous human presence on ISS in low-Earth orbit, the agency leaders noted the stable, solid, and robust ISS partnership that will serve as the basis for working together in future human exploration.

The heads reaffirmed the ISS is the foundation for human exploration beyond low-Earth orbit highlighting its technical, scientific, and developmental capabilities. The ISS partnership will continue to advance the use of the ISS for the benefit of humanity.

For more information about the ISS, visit:  http://www.nasa.gov/station