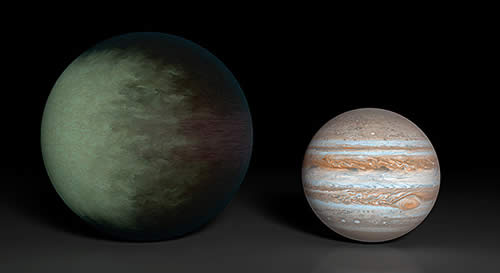 Kepler 7b (left), which is 1.5 times the radius of Jupiter (right), is the first exoplanet to have its clouds mapped. The cloud map was produced using data from NASA’s Kepler and Spitzer space telescopes. IMAGE: NASA/JPL-CALTECH/MIT

Boston, MA-(ENEWSPF)- On the exoplanet Kepler 7b, the weather is highly predictable, an international team of scientists has found: On any given day, the exoplanet, which orbits a star nearly 1,000 light-years from Earth, is heavily overcast on one side, while the other side likely enjoys clear, cloudless weather.

The new work, by researchers from MIT and other institutions, is the first mapping of the distribution of clouds on an exoplanet. The scientists observed that one of Kepler 7b’s hemispheres is blanketed with a dense layer of clouds — far denser than any found on Earth, and so thick that it reflects a significant portion of its host star’s incoming light. This shield of clouds makes the planet cooler than others of its type, creating an atmosphere that encourages further cloud formation.

The team generated a low-resolution map of the planet’s clouds using optical data from NASA’s Kepler Space Telescope. The researchers also analyzed the light originating from Kepler 7b at various phases of its orbit, finding that much of the planet’s reflectivity is due to the presence of clouds, and that this cloud cover is unevenly distributed.

“There are a lot of different chemical processes that could take place to create this inhomogenous cloud,” says Nikole Lewis, a postdoc in the Department of Earth, Atmospheric and Planetary Sciences (EAPS). “Kepler 7b is an important test-bed for the way circulation and cloud distribution work together in exoplanet atmospheres.”

Lewis and her colleagues have published their results in Astrophysical Journal Letters. Co-authors from MIT include postdocs Brice-Olivier Demory and Andras Zsom, graduate student Julien de Wit, and Sara Seager, the Class of 1941 Professor of Physics and Planetary Science.

Kepler 7b was among the first exoplanets identified by the Kepler spacecraft, which has since confirmed more than 130 planets outside our solar system. The planet is considered a “hot Jupiter,” as it is composed mostly of gas, and is about 50 percent larger than Jupiter (although it has only about half the mass of that planet).

In 2011, Demory analyzed Kepler 7b’s albedo, or reflectivity, and found that it is unusually bright for an exoplanet, reflecting about 50 percent of light from its star. At the time, the cause of such reflectivity was a mystery, but the new analysis, which makes use of Spitzer’s infrared observations, reveals that much of it is due to the presence of clouds in Kepler 7b’s atmosphere.

To reach this conclusion, the researchers looked through three years’ worth of Kepler light data, combined with recent thermal observations from the planet, taken with NASA’s Spitzer Space Telescope. Combining both datasets, the researchers compared the amount of light and heat given off by the planet at every phase of its orbit. The planet is tidally locked, presenting the same face to its star at all times. From Earth, the planet appears to wax and wane as it circles its star, much like the phases of our moon.

“You can reconstruct the information in terms of brightness, slice by slice,” de Wit says. “This is really fantastic, because though the planet is extremely small, there are techniques for getting spatial information about the planet.”

The researchers analyzed Kepler 7b’s phase curves — measurements of light from the planet at every orbital phase, taken by the Kepler spacecraft. To determine whether these emissions stem from light or heat, the team looked at phase curves in the infrared, provided by Spitzer. They detected very little thermal energy emitted by the planet — a confirmation that most of Kepler 7b’s emissions are indeed reflected light.

But that finding wasn’t a sure indication of clouds on the planet. The group reasoned that the reflected light could instead be caused by a phenomenon called Rayleigh scattering, in which light from Kepler 7b’s star uniformly scatters around the planet, reflected by atoms or molecules much smaller than those in clouds — much as Earth’s atmospheric gases scatter sunlight, creating a blue sky.

To distinguish between the two possibilities, the group looked again at Kepler 7b’s phase curves. If the planet’s reflectivity is due to uniform Rayleigh scattering, its light emissions should peak at the point at which the planet is behind the star, displaying its full dayside to an observer. But instead, the researchers found that the planet’s brightness peaked slightly after it had passed behind the star, indicating that its reflectivity is not uniform — a sign that the reflectivity was due to an uneven distribution of clouds.

It’s unclear exactly what conditions may give rise to such a stark contrast in cloud cover; Lewis says that investigating the possible causes will be a research focus in the future.

“Kepler 7b happens to be in this temperature range where you can form condensates high up in the atmosphere,” Lewis observes. “Compared to Jupiter, it has a lower gravity that allows you to keep particles lofted much more readily. So Kepler 7b is in this happy regime that allows the atmosphere to create this dense cloud deck. It will keep us busy for the next several years.”

“This detection of clouds on Kepler 7b is very startling, but also very convincing,” says Drake Deming, a professor of astronomy at the University of Maryland who was not involved in the research. “This illustrates that the Kepler data are a gold mine of information that we haven’t fully mined yet, even for atmospheric properties.”

This research was funded by NASA. Zsom was supported by the German Science Foundation, and de Wit received support from the Belgian American Educational Foundation and Wallonie-Bruxelles International. Lewis is supported by a Sagan fellowship.