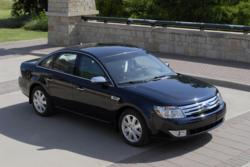 The car that started the trend for quality design and engineering – wowing many consumers when it debuted in the early 1980’s – is back again for another go. The new Taurus will replace the outgoing Five Hundred, which did not capture the hearts of Americans as Ford had anticipated.

According to Dan Leadingham, sales consultant at Terry’s Ford Lincoln Mercury in Peotone, “The Five Hundred sales were fair to mediocre.” So it is not a surprise that after two years the decision to reinvent the Taurus and bring it back with bold styling and engineering may be Ford’s greatest achievement yet. From the first glimpse, consumers will know right away that this car means business. With its trademark chrome grill and silver accents on the exterior, it appears to personify luxury. The body style of the Taurus is similar to the Five Hundred. It’s about the same size and similar in interior design. Don’t be fooled, this car is not the Five Hundred in any way. The most significant improvement to the new Taurus is the powertrain. It now features a 6 speed automatic transmission versus the CVT transmission that came equipped on the Five Hundred.

The model I test drove was the Taurus SEL, which came with lots of features for being the low end model with a price tag of under $24,000. This is a lot of car,” said Leadingham. All Taurus’ come equipped with wood accents and a standard 3.5 liter 6 cylinder engine that proves it to be a worthy contender. It boasts 263 horsepower and excellent fuel economy with 28 miles per gallon on the highway. Its acceleration was very responsive, going from 0-60 in 6 seconds.

Inside the cabin you will notice attention to detail. On the leather wrapped steering wheel, consumers can control the radio and activate cruise control. Not only that, there is an option called SYNC – exclusive to Ford – operates Bluetooth voice activated hands free phone calling and hands free digital media playing. This function allows consumers to play songs from their digital devices on command by using voices to operate. 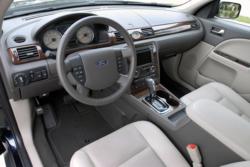 Cloth seats are standard on the SEL but can be appointed with leather as an option. The gauges, with their black background, are easy to read. The 22 cubic feet of cargo space in this car makes storage plentiful. That’s just the trunk. Both seats in the rear and the front passenger seat fold flat. Take a trip to the back seats of the Taurus and the rider will find plenty of head room, leg room, knee room – all kinds of room.

The comfort level in this vehicle exceeded all expectations. The suspension was smooth and handled well when making tight corners and maneuvers. Another feature that is standard on the SEL is the MP3 player connection port. Here, consumers can listen to all of their favorite tunes through the standard system, which contains four powerful speakers that surround the cabin. The car’s exterior is equipped with fog lamps and has 17 inch wheels of aluminum or chrome.

If the Taurus SEL doesn’t suit you at first glance, there is the Taurus Limited, with its upgraded sound system, 6 disc in dash CD player, built in analogue clock, white faced gauges, heated leather seats, dual climate control that allow passenger and driver to control their own temperature settings, and automatic headlights. The Taurus has done a lot in the safety department for both the Limited and SEL by offering traction control anti-lock brakes and multiple air bags.

Ford has put lots of thought into the reinvention of the Taurus, which during its first generation was named the best selling car in America. After 2006, however, it was only offered as a fleet vehicle, Leadingham said. The new 2008 Taurus is impressive, sleek, and well designed and hopes to capture the hearts of Americans once again. The question still remains, however, why did Ford take the gamble to stop manufacturing the Taurus to consumers after 2006 in the first place?

Another question is why it was brought back? Leadingham doesn’t know the official reason, but suspects it has to do with product recognition. “The Taurus has always done so well for Ford.”