A Grand Opening for Tower Cleaners 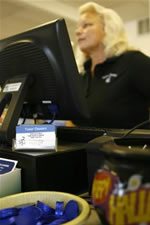 Park Forest, IL—(ENEWSPF)— Tower Cleaners recently celebrated the Grand Opening of its new location in Downtown Park Forest. The dry cleaning business had been located in one of buildings in the 200 block of Blackhawk until they were informed in May that they would have to move or pay taxes in addition to rent they already paid.

The abrupt decision by the owner of the property, Mrs. Lucy Bibbs, was communicated by letter to Janet Fiorenzo and to Laura Faso, the owner of Faso Pizza. Initially, both businesses were given just 60 days to move from May 1, 2007, but that deadline was extended after eNews Park Forest first broke the story.

Fiorenzo shared her thoughts on moving to Downtown Park Forest, “We’re glad to be here, and it was a blessing that we got kicked out.  It really was.  We’re finishing up our sixth week, and we’re at 150 new customers, and we got our old customers following us over here.  We’re getting [people from] Arcadia, Allegheny, Choate, Fir — all new addresses."

The Grand Opening was held on November 3, and featured a blessing of the new business location by Deacon Joe McDonnell of Saint Irenaeus Catholic Church. There was plenty of food on-hand, and plenty of people to eat the food and celebrate with Fiorenzo and Tower Cleaners’ employees Brooke Cahill, Amy Shutts, Lauryn Tripodi, and Rose Ruggeri.

Pictures from the event can be found here , in the eNews Park Forest Photo Store . 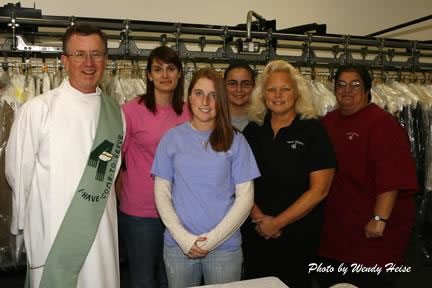