Representative-elect Riley paid tribute to Rep. Robin Kelly when contacted late Monday for a statement, "I'm going to be continuing the provision of good government in the 38th Representative district and the South Suburbs as a whole.  As the 38th District was part of a legislative re-map six years ago, Robin Kelly was, in fact, the first representative of the district.  As such, she set a high standard for thoughtful and independent leadership. It is this kind of leadership that the people want.  I will continue this trend, along with bringing my analytical skills to the office.  My years as a policy analyst and public administrator will serve me in good stead as a lawmaker in Springfield."

Will Continue as Rich Township Supervisor 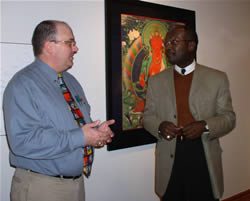 "I will also continue my duties as Township Supervisor since Rich Township is about 80% of the district.  There will be no administrative continuity lost in Township government as I assume the duties of State Rep. To the people of the 38th district, they will get my knowledge of management, public administration and economic development applied to the office and legislation that I will support.  They will get my sense of respect, unwavering dedication and thoughfulness as I administer my duties.  This is something that unfortunately is lost on some who hold public office.  They will also get my commitment to explain to them the often confusing public policy issues that so often come out of Springfield.  After all, an informed electorate is an involved electorate.  Thanks for your support and the support that I have received from many in the 38th District in the past."