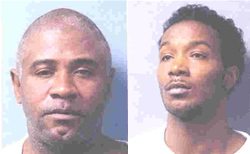 Ricky Walker (left) and Samuel Jackson (right) were arrested August 31 and charged in connection with an alleged kidnapping/robbery that originated in Park Forest on July 22, 2007. (Photographs: Park Forest Police Department)

Park Forest, IL—(ENEWSPF)— The Park Forest Police Department issued a press release late Friday afternoon regarding the arrest of a father and son charged in connection with a July kidnapping in Park Forest.

Ricky Walker, 48, and his son, Samual Jackson, 25, of Harvey, were arrested and charged today with aggravated kidnapping, aggravated vehicular hijacking, and armed robbery. The alleged offense occurred in Park Forest on July 22, 2007.

Park Forest detectives recovered evidence at the scene which later identified the father and son as suspects. The detectives, along with the South Suburban Emergency Response Team, served a search warrant at 15633 Dixie Highway, Harvey, where the two suspects live, and recovered additional evidence.

The two are to be transported to the circuit courhouse in Markham for a bond hearing. 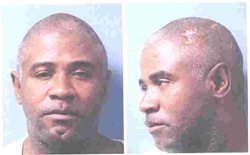 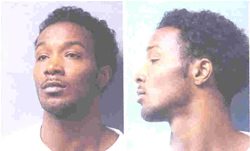