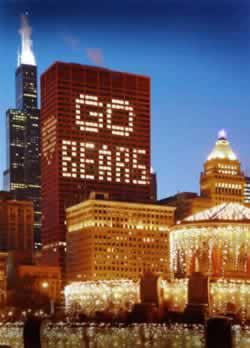 CNA's Home Office lights up the Chicago skyline in support of the Chicago Bears. Get a high resolution version of this image here.  (Photo: Business Wire)

Park Forest, IL–(ENEWSPF)– Bear Down, Chicago Bears, The fight song of the Chicago Bears, was written in 1941, "the year after the Bears had shocked the professional football world by defeating the Washington Redskins in the league championship game by the score of 73-0, which remains the largest shutout margin in any game in the history of the NFL," according to an article on Wikipedia, the internet's free encyclopedia.  The author, according to the article, is listed as Jerry Downs, which is a pseudonym for Al Hoffman, a member of the Songwriter's Hall of Fame.  Al Hoffman also wrote the lyrics to "If I Knew You Were Coming, I'd Have Baked a Cake," according to an article on Answer.com.  The words follow:

If you would enjoy hearing the tune, then enjoy an external link to Georg Solti and the Chicago Symphony Orchestra performing the song.  There's no better time to learn the words if you want to be ready for that Superbowl XLI party.