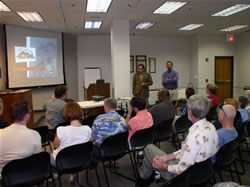 Park Forest, IL—(ENEWSPF)— Forty-three people were in attendance on Sunday September 9 at 2:30 p.m. at Village Hall, for the Park Forest Historical Society’s annual meeting and for a program on the importance of Park Forest ’s architecture and design of the village. The society hopes to promote awareness among Park Forest residents of the place the village holds in design history. Preserving the appearance of the village could give Park Forest a chance to become a Heritage Tourism destination

Peter Schlossman, AIA, grandson of Norman Schlossman of the firm Loebl, Schlossman and Bennett, which designed Park Forest, spoke on the importance of the architectural and design project in the history of the firm. Peter is now a Senior Associate Principal in the firm Loebl, Schlossman and Hackl. The firm was responsible for the design and layout of the village and for the architectural designs for the townhomes, the shopping center, Rich Township High School– now Rich East, Lakewood School, and for placement of churches, parks and greenspace in the village. They also played a large part in the design of the houses throughout the village. Joseph Goldman, Construction Supervisor for American Community Builders, had a major influence on the design of homes as well. Mr. Schlossman showed slides of the original architectural renderings for the village, and photographs of some of the buildings. He told the history of the architectural firm, how they became involved in the project and how they engaged Richard Bennett. He showed examples of other design projects the firm has been involved in like Old Orchard and Water Tower Place, and hospital complexes like Weiss Memorial.

A draft of the original Plan of Town which was submitted to the FHA in November 1946, included the design of the houses in Lincolnwood subdivision, which was not built until, roughly, 1958-1963. We think of those house styles as having originated in the late 1950s, but they were already on the drawing boards of Loebl, Schlossman and Bennett in the mid to late 1940s. The original of that draft is in the Park Forest Local History Collection and Archive, unfortunately in storage at this time.

Mr. Schlossman spoke on the selection process for the AIA 150. Park Forest is on the AIA 150 list for Illinois which was announced in April of 2007.

Two excerpts of a videotaped oral history interview with architect Richard Bennett were shown, along with a few comments from an interview with ACB President, Philip M. Klutznick on why ACB built the village, giving returning veterans preference as tenants. Mr. Bennett was walking in the Park Forest Shopping Centre in 1980, with interviewer Chip Shields, discussing his original design for the shopping center. He then spoke from one of the greenspaces between townhome courts, describing the original concept for the open space designs.

Anthony Rubano, an architect with the Illinois Historic Preservation Agency, who promotes the study and preservation of Park Forest architecture spoke on some of the architectural treasures in Park Forest . He included slides of Faith United Protestant Church, Trinity Lutheran Church and Church of the Holy Family. His talk centered on how post-World War II house designs evolved and interspersed slides of Park Forest homes in the talk.

Central Park Townhomes have hired a consultant to do a National Register of Historic Places nomination for Area F. The nomination will be written as a multiple property listing. This means that most of the written material for the background of the town and the housing styles will be done for that nomination. As other districts, public buildings or private homes enter the eligible age for nomination, they could be added to the multiple property listing with much less effort.

The National Register of Historic Places has only in the past few years begun to accept buildings fifty years old for nomination. It is part of a Recent Past initiative, also being promoted by Landmarks Illinois. With this initiative, sections of Park Forest homes and public buildings are becoming eligible to be nominated, as they turn 50 years-old. Large sections of Park Forest meet this age limit. If the nomination the consultant is writing wins National Register status for Area F, other districts can be added, gaining recognition for Park Forest . The caveat is that buildings and districts to be nominated, must at the time of nomination, be in fairly original condition—retaining the integrity of the original design. Houses modernized by the Village’s currently offered architectural design plans would not be eligible, and might affect the nomination of the district they are in.

The architecture and the layout of the village of Park Forest are studied around the world as an example of Mid-Century Modern post-World War II suburban design.

Archivist Jane Nicoll says, “I attended the Landmarks Illinois Statewide Preservation Conference in June on the day designated as “Recent Past Day.” The keynote speaker, Richard Longstreth, director of the Graduate Program in Historic Preservation at George Washington University, used slides of Park Forest to illustrate his talk, “The Imperatives of Preserving the Recent Past.” Dr. Longstreth is a founding member of the Recent Past Preservation Network. When I introduced myself, he was delighted to hear that Park Forest Historical Society was preserving the history of the village and its architecture.”

For the most part, only homes on Oakwood Street, a handful on Monee Road, houses in Thorn Creek Estates, and the fifteen Parent Magazine houses had individual architects. A two block section of homes from Western Avenue heading west on Sauk Trail, were prefab houses from a number of firms that ACB was experimenting with, including one Lustron house, which is now covered in siding. Philip Klutznick originally had planned an order for a large number of Lustron Homes. Lustron Corp. and Carl Strandlund, who owned it, went into bankruptcy before the houses were constructed in Park Forest .

The houses in Eastgate were the Cape Cod design borrowed from Levittown, the first Post-World War II suburb built in the U.S. Levittown and subdivisions like it were the inspiration for the song by Malvina Reynolds, “Little Boxes,” American Community Builders architects rejected the use of that model and made a concerted effort to integrate a variety of materials and house plans in the rest of Park Forest– even in the facades and roof lines of the rental townhomes– to avoid this image of suburban developments with houses that looked all the same on every street. As an example, if you travel down Westwood Drive , you will see 4 house plans used in rotation as you drive down the street.

A very special guest at the event was Christina Morris of the Midwest Office of the National Trust in Chicago . The society had on display some materials prepared by Ms. Morris and others on how to preserve your ranch style home. An issue of Atomic Ranch magazine was on display, which is a periodical celebrating mid-Century ranch house designs and offering ads for businesses which supply authentic restoration supplies. Jane Nicoll has these materials, if anyone would like to look at them.

All program meetings of the society are open to the public. Information is with Jane Nicoll at 708-481-4252.

Previous articleWhat Part Of ‘Secular Nation’ Do We Not Understand?
Next articlePolice Report – September 17, 2007