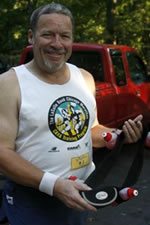 Park Forest, IL—(ENEWSPF)— Glenn Benjamin’s route to the grueling 26.2 miles of a marathon was not typical, by any stretch of the imagination. A few years ago he was pushing 275 pounds, took blood pressure and cholesterol medications, and learned he had type 2 diabetes. Now, he takes no medication and weighs 100 pounds less. But his path to the finish line is not one that he would necessarily recommend.

He remembers watching the marathon on television in 1976, and thinking that he would like to do that some day.  It would be a long road, though, to his first 26.2 mile trot.

Mr. Benjamin works for the Union Pacific Railroad. He discovered he had diabetes during a trip to the doctor when he suffered a wrist injury at work, "It turns out I’m a type 2 diabetic.  They put me on medication and said if I controlled it with diet and exercise,  I would be able to stay off the insulin." Benjamin started running sporadically soon after he got the news, and completed his first 5K in Park Forest that same year. He has been a homeowner in Park Forest since 1984.

He admints the diagnosis rattled him a bit, "I’ll be 52 in October.  Being diagnosed in my mid-40s, it scared me. I had no idea I was diabetic."

Still, Benjamin did not find much success during these early years running, and continued to gain weight, “I started running on my own.  I had no structure, I had no discipline. I had no idea about the right shoes, or anything like that. I ballooned up to my breaking point in 2004, I weighed 275 lbs.”

He decided to investigate surgery as a possible solution after his mother had gastric bypass surgery. 18 months later, he had the same procedure, "At the time, I was on medication for blood pressure, high cholesterol, diabetes.  In another week, it’ll be 3 years since I had my surgery.”

Benjamin says it was major surgery, “I would not recommend the surgery to anyone, but if you’ve reached a point where that’s what you wanted to do, I would recommend where I went.  I went to the Wish Center, where Carnie Wilson went, in Aurora."

Not A "Quick Fix"

Preparation for the procedure entailed a long period of evaluation and counseling, and Benjamin credits this with his success — unlinke a coworker who underwent a similar procedure, “They had me charting my food for 6 months.  They trained us.  You’ve got to change your complete, whole lifestyle.  It’s not like they say, ‘Here’s your surgery, go have a good life.  They prepare you.  I think that’s why my co-worker [gained weight back].  He didn’t have that place, he didn’t have that mindset.  He was looking for a quick fix, and there’s not real quick fix."

“I eat six times a day.  I just eat small meals.  That’s how it works.  You’re literally unable to [over]eat."

Glenn says his mother is also doing well, and does not regret the choice he made for the surgery, “I just knew I needed a complete change. Today, after losing 100 pounds, I’m off of all my medications.  Technically, I’m still a diabetic, but I don’t have to take any medicine.  I take no insulin.  My blood pressure is good.  My cholesterol is good.”

This was the only thing that worked for him, “I did Slim Fast, Atkins.  I tried so many, you know,” he laughs.  “Nothing ever was long-term.”

He’s found most success in running, “I don’t listen to music.  I just enjoy being out in nature.  It’s just a commitment.  I’m a goal-oriented type of person, when I can get motivated.  And I don’t want to find the weight I lost.”

“In 2005, I went to the marathon in Chicago.  I was a spectator.  It was just incredible – an incredible experience.  I was so caught up in the energy.  I couldn’t leave.  I was there five hours into the race, and I’m looking at these people thinking, ‘I’m in better shape than they are, but they’re out there!’  So, I told myself that was something I wanted to do before I die…”  Here, he chuckles again, “And, in January 2006 I put my money down and I told myself I was going to do it.  But I also knew I that I needed the training and the motivation, and that’s what led me to the [Park Forest Running and Pancake] club.”

He completed his first marathon in 4 hours 58 minutes, and hopes to beat that in Chicago this year.

Benjamin considered other area running clubs before settling on the PFRPC, “I looked at CARA.   I looked at the Calumet Striders.  And when I hooked up with the pancake club, their motto is what really caught me, ‘Start slowly, and then taper off!’"

He completed his second marathon in Atlanta in March of this year.  “This is something that I’ve thrown myself into.  I look good.  I feel good."

“I’m running right now four times a week, counting the Saturday long run.  I’ve been using the Hal Higdon training method and the I-Runs [training program]," he says, referring to a training program sponsored in part by the Park Forest Running and Pancake Club. " I’ve got a 4 mile run tonight.  Tomorrow, we do 16, and we’re 51 days from Chicago [marathon].”

A week prior to this interview Benjamin did the Chicago Distance Classic Half-Marathon, his 5th half-marathon since last June.  After Chicago, he has plans to run the Disney Marathon in January.

"I kind of have a pipe dream of doing a marathon in every state.  It’s something to shoot for.  Whether I do it or not, we’ll see.”

Mr. Benjamin credits trainers in the running club with his success, “I was really impressed with the training we got from the club:  Joe Baska, Fred [Mazurski] …, they took us under their wing.  There were no major surprises.  We were prepared for everything that happened, because of the experiences they shared with us.”

And, yes, Glenn wants to see Park Forest keep the race that actually got him out the door in the first place, “I’m willing to do whatever I have to do to help save the Scenic 10.”

Referred to an article in a recent issue of Runners World that talks about running strengthening the knees.  “That’s one of the things I was pleasantly surprised to hear.  That’s a myth, an excuse not to run.”

He shared some thoughts on the running club, and running in general, “The great thing about the club is, it’s so diverse.  We have young and old, men and women, fast, slow, elite, turtles, and the camaraderie.  After the [Saturday] run breakfasts are fabulous.  I really look forward to them. Plus, there’s something about getting out and being healthy and active.  It’s like anything.  The hardest part is getting out the door.  But, after you finish a run, you feel very satisfied.”

Mr. Benjamin concluded reminiscing about times on the trails when he was literally so absorbed in running that he didn’t take notice of the passage of time,  “Is that the runners’ high?  Works for me!  It’s free. It’s legit.”